Benjamin "Ben" Kirby Tennyson (born December 27, 1994) is the protagonist of Ben 10: Missing Pieces and Ben 10: Protector of the Omniverse. He first appeared in The Monster. He is a human from the planet Earth, the leader of Alien Force and the wielder of the Infinimatrix. He is the Timeline 1 counterpart of the canon Ben.

In The Monster, 10-year-old Ben had his Heroes United appearance.

In Up to 11, 15-year-old Ben looked like 16-year-old Ben in Heroes United, but with the Omnitrix instead of the Ultimatrix.

In Protector of the Omniverse, 19-year-old Ben has his Heroes United appearance, but he wears a short-sleeved white T-shirt outlined in green, with a black hourglass symbol in the center, with the number 10 in green. He wears long black pants with six horizontal white stripes. His hair also more closely resembles his original series hair, and he wears green shoes with a black outline. He wears the Infinimatrix on his left wrist.

In Protector of the Omniverse, when playing soccer, Ben wears his Alien Force soccer clothes. 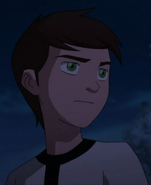 10-year-old Ben in The Monster

Initially cocky, childish, and arrogant, Ben's immaturity and attention-seeking behavior often led him to joke around, regardless of the situation. His allies often criticized his attitude, unaware of the fact that he used humor to mask his fears. Despite some childish attitude, he was heroic, caring and generally good-natured, always willing to save others at any time.

Over the years, Ben has displayed good leadership skills, as well as the ability to adapt his attitude to a situation, becoming serious when it's called for. He became more mature, responsible and sensible. He's kind-hearted, willing to sacrifice even his own life for others. His idealistic views and unwillingness to compromise his values – aspects condemned by Azmuth yet commended by others – sometimes drive him to act against reason.

Ben makes an appearance on TV as Heatblast in Thnks fr th Mmrs, through footage shown on the news of his conversation with a boy about Sumo Slammer cards in Washington B.C.

Ben went through the same events as his canon equivalent as depicted in the original series and Destroy All Aliens.

In The Monster, Ben, Gwen and Max met Malware, an incomplete Galvanic Mechamorph accidentally created by Azmuth, who lost his patience and kidnapped Myaxx to complete himself. Eventually, he was turned into a more powerful form, and planned to kill Azmuth. After failing to reason with him, Ben used Diamondhead to trap him in crystal.

Sometime later, Ben had the Omnitrix removed and resumed a normal life. He kept it in a chest his room.

In 2010, Ben went through the same event as his canon equivalent as depicted in the first two seasons of Alien Force. At the end of War of the Worlds: Part 2, the Omnitrix's roster was reset, giving Ben access to 10 new aliens.

Six months later, in Up to 11, Myaxx teleported Ben, Gwen and Kevin to Azmuth's lab after Albedo arrived, armed with a new device named the Antitrix, and demanded that Azmuth restore his original form. Ben fought Albedo while Gwen and Kevin heard the story of how the Galvans built Galvan Mark II after the Highbreed destroyed the original Galvan Prime. They later interrupted Ben and Albedo's fight to deliver some news. Azmuth explained that he did not have the time or patience to build what was necessary to restore his original form, but he could instead unlock the Galvan sample in the Omnitrix and sync the Antitrix with the Omnitrix so that Albedo would gain access to the sample. Albedo reluctantly agreed and Azmuth did what was necessary. Shortly after Albedo turned into a Galvan, he mutated due to the low-quality components he used to build the Antitrix. Ben tried to cure him with the Omnitrix, but was unsuccessful. Blinded by rage, Albedo started blaming Ben, but Ben quickly defended himself, saying he had nothing to do with his decision to create the Antitrix and that he could still make a better future for himself. Impressed with Ben's wisdom, Azmuth re-unlocked all of Ben's previously-used aliens except for Feedback and left the room with Albedo. Ben expressed that he was going to miss Gwen and Kevin, but Gwen said they still had some time before that was going to happen and promised to visit on special occasions. The trio then returned to Earth.

Protector of the Omniverse

It's evident that Ben is smart in some respects, possessing an above-average intelligence. He also has fairly moderate grades. Physics and Chemistry are his toughest subjects, yet he still maintains a B+ average.

Ben has an extraordinarily sharp memory. This is even more true for things that interest him.

Ben is also a cross dominant, skillfully wielding tools and weapons in either hand, in human or alien form.

Ben is the wielder of the Infinimatrix (formerly the Omnitrix), which gives him the power to modify his own genetic code in order to turn into various alien creatures. Traditionally, he could only transform into ten aliens at the beginning of both the original series and Alien Force, but he later gains additional forms by either unlocking them or by scanning the DNA of aliens he meets.

When transforming into an alien, Ben gets all the creature's features, including its appearance, voice, all of its unique and special abilities and powers, strengths and weaknesses. Though he mostly retains his personality, there are some cases where the transformation causes a change in it, like with Rath and Juryrigg.

The Infinimatrix has a built-in Universal Translator that allows Ben to communicate with most aliens that don't speak English.

The Infinimatrix has the ability to manipulate and repair genetic damage, a function he used to cure DNAliens and save the Highbreed from extinction with the Omnitrix.

Whenever the Infinimatrix times out, Ben is left powerless until he either dodges or switches to a new alien form. In addition to gaining the selected alien's powers and strengths, he gains its weaknesses. Additionally, at times the natural biological behavior of certain aliens can override Ben's behavior, such as Big Chill's reproductive phase. Furthermore, any illness Ben is experiencing in his human form will also affect his alien forms.

Whenever Ben unlocks a new alien form, he is at a disadvantage of not knowing its abilities and weaknesses until he gains experience with using the new alien.

Despite his experience in using the Omnitrix and Infinimatrix, Ben still does not know every function of them. Due to his inquisitive nature and impatience, he has accidentally unlocked new functions such as the Master Control, which can at times do more harm than good.

Ben has an allergy to peanuts and also used to have coulrophobia, the fear of clowns.

Ben's left eye twitches whenever he tells a lie, but only Kevin appears to notice this.

Ben appears to have a short attention span at times, and more often than not it can get him into trouble.

Though he has matured substantially since receiving the Omnitrix, he is still a teenager with much to learn and is prone to irrational impulses and recklessness.

All episodes except Ways to Say Goodbye and Crossroads.

Protector of the Omniverse