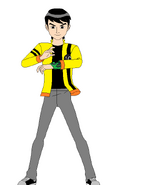 Ben 54 as a kid
Add an image to this gallery

instead of a green jacket he wears a yelllow one, and he has black hair and black eyes.

Before his grandfather's death, he was happy, cocky and making jokes but after Max was murdered, he became serious, he no longer fooled around. He is an Anti Hero though he is not evil, nor is he good, he does what what he thinks is right. He will not hesitate to kill the bad guy.

He is a skilled fighter, he has mastered judo and jeet kundo, so he does not solely rely on his Omninemetrix. He has super intelligence, he has large amount of knowledge about his Omninemetrix as he was able to fuse the Nemetrix and the Omnitrix together.

He is the wielder of the Omnitrix and Nemetrix which allows him to rewrite his genetic code for a short period of time.

Retrieved from "https://ben10fanfiction.fandom.com/wiki/Ben_Tennyson_(Dimension_53)?oldid=811607"
Community content is available under CC-BY-SA unless otherwise noted.