Ben Tennyson is the main hero of Ben 10: Extreme who now wields the Extremix.

Ben Tennyson looks mostly the same as he did before. He wears a purple shirt under a black jacket, this one does not have the "10" on his shoulder. He wears black tennis shoes with a grey patch on them.

The only real power Ben has is the Omnitrix.

Since he is the main hero of the series, we're going to only show the episodes that he does not appear in. 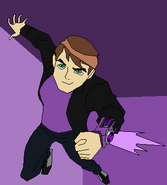 Ben Tennyson Action pose
Add an image to this gallery
Retrieved from "https://ben10fanfiction.fandom.com/wiki/Ben_Tennyson_(BTE)?oldid=862569"
Community content is available under CC-BY-SA unless otherwise noted.