Ben Tennyson is a Human/Heatfreak from the planet Earth in Ben 10 Series who Omnitrix and later,Ultimatrix.

Theme song: There for Tomorrow - Deathbed

Ben is the wielder of the Omnitrix (later the Ultimatrix), which gave him the power to modify his own genetic code in order to turn into various alien creatures, literally making him an alien shape-shifter. Traditionally, he could only transform into 10 aliens at the beginning of both the original series and Alien Force, but he later gains additional forms by either unlocking them or by scanning the DNA of aliens he meets. At the end of the original series, his arsenal included twenty aliens, while his current complete list is sixty-three aliens discovered (Ben 10, Ben 10: Alien Force, and Ben 10: Ultimate Alien, Ultimate forms not included).

When transforming into an alien, Ben gets all the creature's features, including its appearance, voice, all of its unique and special abilities and powers, strengths and weaknesses. Though he mostly retains his personality, there are some cases where the transformation causes change in it, such as Rath becoming far more aggressive, Spidermonkey acting more childish, or Big Chill being affected by his reproduction instincts. Two of the aliens, Ghostfreak and Big Chill, even managed to actually take over Ben's personality twice. Even using Heatfreak getting lose control and began rage. 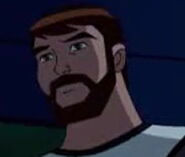 Ben Tennyson (SMT Style)
Add an image to this gallery
Retrieved from "https://ben10fanfiction.fandom.com/wiki/Ben_Tennyson_(A90_Timeline)?oldid=806832"
Community content is available under CC-BY-SA unless otherwise noted.