One day, Ben was walking to find mysteries, but suddenly a ship which had robotic arms came and took Ben away and Ben reached in the space ship, but there he saw Psyphon. Then Psyphon said, "Ben Tennyson! I have a copy of Vilgax's DNA, so I will make a body of Vilgax then I am sure he will kill you in front of me." Then ben said,"I worried about that Psyphon because I have the omnitrix." Then Psyphon said," But I have the master plan to kill you and to destroy the Earth." Then suddenly a loud voice was heard saying, "No, Psyphon don't do that, I am alive. I will stay alive till I take my revenge." Then Psyphon asked,"Who are you?" Then the same voice said,"Vilgax."

Then Pysphon was said to push Ben out of the ship, Psyphon did Vilgax said. Then Ben looking at his omnitrix he pressed Big Chill's hologram, but he turned into Diamond Head and made a huge moutain of crystal to save himself and when he was standing in the mountain he reduce the height of it and then it went to underground.Then ben became normal.

Then the space ship blasted and then ben saw vilgax's space ship rising from there and now he sees that vilgax is with khyber, khyber's dog, dr.phsycobos, malware . so now ben thinks that he should save bellwood from the  villains. MEANWHILE, VILGAX ORDERED MALWARE

'T'O ATTACK BEN. NOW BEN SAID EVERYTHING TO ROOK AND GRANDPA MAX SO THEY HAD TO SAVE BELLWOOD BEFORE VILGAX DOES SOMETHING.

Vilgax in ben 10 omniverse: the rise of Vilgax
Add an image to this gallery 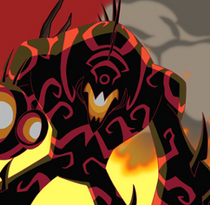 Then Ben, Grandpa Max, Rook, Gwen, Kevin and the other Plumbers get ready to save the earth.Then Malware starts attacking galvan prime, then Dr.Phsycobos says to Azmuth that he can not teleport to anywhere.Then azmuth says then can you prevent me from teleporting someone in. Then  suddenly Grandpa Max, Rook, Gwen, Kevin reach galvan prime and then see that Malware is now bigger then Way big.So, Ben becames Way big then fights Malware but Malware takes Ben and puts him inside his body.Meanwhile, Ben sees his past and talks to him and said not to feel bad that he lost feedback [as shown in showdown part 1 and 2].Then ben suddenly wakes up and sees all the villains inside malware so then ben transformed into feedback [as he unlocks it]

then ben destroyed malware by feedback and so did the other villains expect for khyber's dog who gets tamed by kevin and is known to be a female.So then finally vilgax is defeated by ben.

Retrieved from "https://ben10fanfiction.fandom.com/wiki/Ben_10_omniverse_:_the_rise_of_vilgax?oldid=752078"
Community content is available under CC-BY-SA unless otherwise noted.