Use this page to nominate and vote for the featured Omnitrix alien, which will be listed on the home page. Use the button below to nominate an alien.

Created by CaT and nominated by the same.

Created and nominated by Alan. 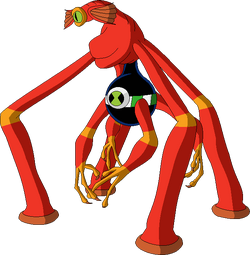 Retrieved from "https://ben10fanfiction.fandom.com/wiki/Ben_10_Fan_Fiction_Wiki:Featured_Alien?oldid=878495"
Community content is available under CC-BY-SA unless otherwise noted.