Whampire is a vampire-like alien with greenish-white skin and sharp yellow teeth. He wears a black and green jumpsuit, with the chest plate looking somewhat similar to that of Big Chill's. Whampire wears black gloves with green fingers that possess sharp claws, has green markings on his suit, and wears a green mask with spikes on it. Whampire’s head is rather large and features green eyes. Whampire also has green flaps under his arms, resembling those of Jetray or the wings of a bat.

Whampire wears the Omnitrix symbol on his stomach.

In his bat form, Whampire becomes a small black ball with wings of the same color and size. A miniature version of his face is on the front of his body.

While burning in sunlight in Blukic and Driba Go to Area 51, Whampire's clothes seem to burn off first, leaving his skin, now grey from the sun, exposed before he himself burns.

In Ben 10: The Omniwars, he has his Omniverse appearance, but with few changes. He now has fingerless gloves, similar to Frankenstrike. He now has stripes on the front of his pants. His skin is slightly paler. His Corrupturas are round instead of an oval shape, and have wider wings. The Omnimatrix IV symbol is on his upper chest.

In Ben 10: Negative Rising, the Omnitrix symbol is now on his chest instead of his stomach.

In Ben 10: Unbound, he has his Omniverse appearance but the Omnitrix is on the chest and has fingerless gloves. His skin is paler. Ben 10,000 as Whampire is taller and has wider wing. The Omni X is on his chest.

In Ben 10: Dimensional Warriors, his powers are the following:

When the Omnitrix times out, Whampire’s Corrupturas, which can be harmed by light (akin to vampires), break down, setting the victim free.

Ben first uses Whampire in One of Us to head to the factory where Sublimino is located, later hypnotizing him to destroy his equipment.

He is voiced by John DiMaggio.

The All New Carl 10 Hour

Whampire in TANC10H isn't much different, except his mask is longer and he has 3 spike-like marks on his head. His green suit part is now green, but with a giant white stripe running down his waist. He has green fingerless gloves and green boots. His Xtratrix symbol is on his upper middle of the chest.

His wings are white.

He is set to appear in 'Gas Hour'.

Whampire in the Galactic Monsters Theme 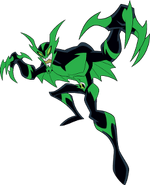 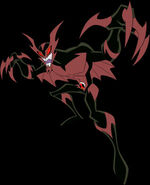