He looks similar to Ommiverse Upchuck, but the green on his body is now a dark blue.

In Richard 10, he looks similar to Upchuck body-wise. Perk Vomit Man is the same as Ben's Upchuck but has dark blue instead of dark green, blue eyes, and the blue alternate Omnitrix symbol on his chest.

Richard 17's Vomit Man isn't much different than Richard's Perk Chuck. His stomach, face, and skin around most of the rest of his body is the same as Upchuck, but he has yellow eyes, alternate Simplicitrix symbol, and stubs on the back of his head.

In Ben 10: The Omniwars, the skin on his face and belly are light blue, while his overall skin is a dark blue. The Omnitrix symbol is on his stomach.

In Ben Ten: Enter the Ultimatrix, he looks the same as the pic, but the dark blue is more teal and the green is darker. Murk Vomit Man looks like GCB's final variant. 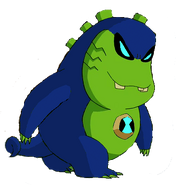 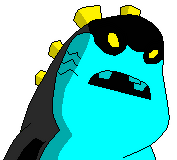 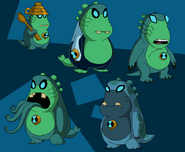 Vomit man variants by GCB: Armor, 11 year old, UA style, Tounges out and Merk
Add an image to this gallery