Ultimate Cannonbolt is the evolved form of Cannonbolt in Ben 10: Ultimate Alien. He first appeared in the episode, Too Hot To Handle to help Kevin subdue P'andor back into his armor.

is armored shell evolves into a more metallic armor with cylindrical studs that turn into spikes when he goes into his ball form. He has two on each back segment, and one on each shoulder, wrist, and leg plates. Ultimate Cannonbolt is also a little bigger than the original Cannonbolt. He is made of some material that can contain radiation. Ultimate Cannonbolt demonstrated this by being abl

e to contain P'andor and Kevin, allowing Kevin to morph the armor around P'andor.

In Ben 10: The Omniwars, his negative form has his Ultimate Alien appearance, but with fur sticking out, and red eyes. The Ultimatrix symbol is on his forehead, just like his devolved form in the original series.

In Ben 10: Unbound, he resembles Cannonbolt in Omniverse but without the stripe, he has Ultimate Cannonbolt's colors and there are studs on his bolts.

Ultimate Cannonbolt has powers that are similar to Cannonbolt, but instead of having a simple armored shell, the shell has become spiked armor that offers increased defense and more offensive capabilities. It is confirmed that he can shoot his spikes too.

He is one of the major characters in Omni-World. He, along with Ditto, Eye Guy and Wildvine form the main gang and often get into trouble or just silly adventures.﻿ 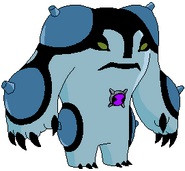 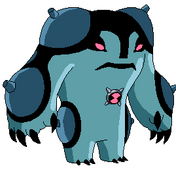