Ultimate Albedo is similar to M.O.D.O.K from Marvel Comics.

In Ben 10: The Omniwars, his limbs are longer, but are still stubby in appearance. He has a larger brain, which is now contained in headgear to regulate Albedo's sanity in the form. His third eye now shows emotion. The Ultimatrix symbol is still on his forehead.

Ultimate Albedo possesses high intelligence, much more than his devolved form. As such, he can predict multiple scenarios and plan for each one.

He can fire a powerful energy beam from his third eye that can take out Eye Guy, Upchuck and Goop with one shot.

He also has telekinesis.

Due to the size of his head in comparison to his limbs, Ultimate Albedo is completely dependent on his hovercraft for supporting himself.

Albedo will only use his Ultimate form in dire situations, as the brainpower is too much for him to handle. 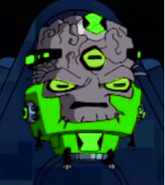 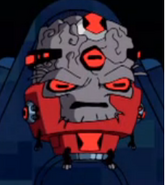 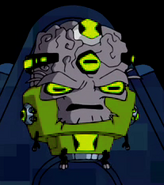