Spitter is a Spheroid from the swamp planet of Scalpasc.

Spitter is a green, bulbous alien. He resembles a puffer fish. He has 3 spikes sticking out the top and bottom of his head. His mouth covers mostly the upper front of him, which is filled with dull colored, pointed teeth. His eyes are connected to the corners of his lips.

He has black pants that partly covers his stomach and has the Omnitrix symbol on the black pants.

In Ultimate Alien, Spitter looks exactly the same except he now has green eyes and white teeth. He wears the Ultimatrix symbol on his stomach.

In Ben 10: The Omniwars, he has his Ultimate Alien appearance, but with green stripes outlining his pants, and the Omnimatrix IV symbol is on his chest.

In Ben Ten: Enter the Ultimatrix, he has his original series appearance, but in the OV style. Also, his clothing color scheme is green and black, not white and black, and the Ultimatrix symbol is on his arm.

Spitter expands his body (possibly from the creation of the green slime) and spits a stream of slime from his mouth. The slime can be acidic, and has been shown to be highly conductive of electricity. He has enhanced strength, and is immune to poison, due to not having a nose.

In Noah 10, he looks the same as Ultimate Alien Spitter. Even though he is rarely used, Noah claims he likes him. It is also shown that along with goo, he can spit acid and other things.

Ben first uses Spitter in The Thrill of the Hunt to withstand the toxic atmosphere of Xenon.

He is voiced by Eric Bauza.

He is one of the aliens that will be used by Ben. He looks the same as his Ultimate Alien version, but with white wristbands on his arms.

Spitter is confirmed to make an appearance in Jimmy 10, but it is unknown when that will happen.

He will make some appearnces in Ben 10: Ultimate Fusetrix Though Aggregor says he is just a Stinkfly that can't fly. Ben uses him neutral.

Spitter is one of the original aliens in Stan 14.

He is Ben Tennyson's  second transformation.

He is one of Stew's original 10 aliens. Also one of the least used. 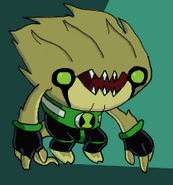 a Fan`s Version of Spitter 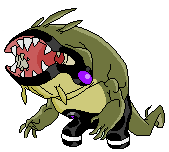 Spitter in Ben 10: Dimensional Warriors
Add an image to this gallery
﻿
Retrieved from "https://ben10fanfiction.fandom.com/wiki/Ben_10_Fan_Fiction_Wiki:Archive/Spitter?oldid=767326"
Community content is available under CC-BY-SA unless otherwise noted.