Simian is an Arachnichimp that was first introducd in Birds of a Feather.

Being an Arachnichimp, Simian bears a strong resemblance to Spidermonkey. However, he has yellow eyes instead of green, also lacking an Omnitrix symbol, and stripes on his tail.

In Omniverse, he still looks like Spidermonkey, but now has black eyes and yellow pupils. His hair is light blue with white streaks and now he has a flipped-up hairstyle. In addition, he wears clothing now, notably a pink shirt. He also now has two white stripes on his tail. In Collect This, Simian is shown wearing a wig identical to Gwen's hair, a purple plaid skirt, and Kevin's blue wholesters.

When he met Ben in Birds of a Feather, he told him a lie (that he was a prince and he needed to get a crystal). When Ben cracked the code, he swapped the crystal with a DNAlien ear cleaner, which resulted in unbearable pain with a Highbreed. 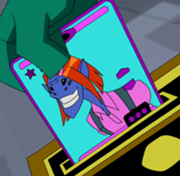 Simian in his current form.

Retrieved from "https://ben10fanfiction.fandom.com/wiki/Ben_10_Fan_Fiction_Wiki:Archive/Simian?oldid=745126"
Community content is available under CC-BY-SA unless otherwise noted.