The Original ("Prototype") Omnimatrix (often referred to as the Omnitrix) was a watch-like device that attached to Ben's wrist in the first episode of the franchise and is the device that the series revolved around.

The Omnitrix was created by Azmuth as a tool of peace, following the destruction caused by his previous creation, Ascalon.

The Omnitrix was destroyed in the Alien Force finale, in order to prevent Vilgax from using it.

Azmuth revealed in the Ultimate Alien finale that this Omnitrix was just a prototype and that he had been working on the newly improved version ever since Ben obtained the former.

Originally, the Omnitrix looked like a very big wristwatch, primarily black and grey in color, with a grey dial in the middle, which has a green hourglass symbol (the intergalactic peace symbol, which is also found on Plumbers' Badges and on Galvan Prime).

When it recalibrated, it became smaller, gained a green wristband and the dial in the middle turned to black. It also gained two grey buttons on each side.

Active Mode is the Omnitrix's default mode. Actual usage time is unknown (about 10–20 minutes). The Omnitrix seems to time out sooner if it's taxed by activities with a lot of moving, like fighting. However, if regular transformations are tampered with, the user can't always turn back. After the Omnitrix recalibrated, the symbols on the aliens were also of the green color, and located on their chests.

When the Omnitrix times out, it goes into Recharge Mode. It takes around 5 minutes to recharge, though it may take more time if tampered with. Recharge Mode's main purpose is to keep the Omnitrix from damaging the user. The Omnitrix is powered by a special self-renewable power supply that will long outlive Ben.

Unlike in the original series, the Omnitrix in Alien Force would not scan by touch (due to its recalibration).

In Self-Destruct Mode, the Omnitrix charges energy while counting down until it explodes. S.D.M. functions as a last resort should the Omnitrix fall into the wrong hands. It can be activated by Voice Command.

When in S.D.M. for a few days, the Omnitrix can charge enough energy to cause an energy ripple that will destroy the entire universe.

In the original series while the Omnitrix was in S.D.M. it sent out bursts of energy that threw Ben through the air.

When the S.D.M. is activated, the Omnitrix sends out a signal that any ship can pick up (unless it was activated by Voice Command), such as when Vilgax picked it up with a stolen ship and Tetrax picked up the signal. Likely as a distress signal.

The S.D.M was used and successfully triggered in The Final Battle: Part 2, though it only destroyed the Omnitrix and not the universe because it was charged for 30 seconds (as opposed to a few days).

The Omnitrix begins to recalibrate whilst selecting a set of new aliens.

The Omnitrix makes a beep-like noise, then it changes to a glowing black and green and morphs into its new shape. It is unknown how Recalibration Mode is activated.

In Ven 10, Ven wears a powerful watch called the Ganamatrix. It allows her to turn into fused and custom aliens.

Ben 10:Power of the Nanitetrix

In the Series, Ben recives the Nanitetrix, the Nanite form of the Omnitrix, with the re-created 10:

In Mad 10, Mad recives the Omnitrix in Appoplexian with an Omnitrix, Part 1 with only 10 accessable aliens:

He will unlock more in the future.

Azmuth Created a sample Omnitrix, and accidently sent it to Earth, and Courtney found it. It only has Ben's Orignal alien's, Like Four Arms, Wildmutt and Ghostfreak.

The Alternate Omnitrix worn by Ben's alternate version Ken, it's features and functions are pretty much the same. It also looks identical up until the point where it recalibrates, at which point it changes its primary color to blue instead of green. Also, in this timeline the Omnitrix later on gets the evolution feature of the Ultimatrix programmed into it.

The Nightmare Mode can be created/accessed by Zombozo and Ghostfreak only. It makes Ben's aliens look evil.

Ken's Cryptomatrix is created by Azmuth and his cousin, Acu. It has 10 aliens both old and new. For more info, go to Kenny Tennyson.

The Coutrnatrix was created by Azmuth after Counrtney's first Omnitrix was destroyed. Her Omnitrix sign is sink, and so is her Omnitrix.

Omimatrix is a minor of Omnitrix, which releases DNA out into Ben's body and has new aliens like Angelhands.

Ultratrix is created by Acu only. It creates side-effects to aliens turning Omnitrix's aliens in Ultimate Aliens. This Ultratrix also unlocks DNAs from stream of Primus instantly in dramatic or hazardous times.

The Polytrix is a similar device to the Omnitrix but made by the Cerebrocrustecean Zynon Cripton. It looks like the recalibrated Omnitrix, but with the holograms of the aliens it shows also floating pages about the powers, species and planet of the alien. It can contain up to 50 aliens and it can also upgrade the aliens. It is attached to Simien, an Arachnichimp. It's forms aren't in the Omnitrix and its recalibrations because Azmuth didn't take DNA samples from Alpha Solaranlage because it was out of the Milky Way at that time when he took DNA

The Fusiontrix looks exactly like the alien force Omnitrix except it has a Black band with green lines. It is used by Glen in the Glen 10 series. The Fusiontrix contains 10 aliens fused from some of the original Ben 10 aliens.

Infimatrix is an alien device that looks like the Ultimatrix but is blue with purple lines and made by a Cerebrocrustacean named Caliston.It's alien holograms look like the Omnitrix's.It contains 72 aliens but gain more DNA for more aliens.

Stan names it this in the 1st episode after hearing it is called the Omnimatrix. Looks sort of like a plumber's ship but with a dial and doesn't have a green part in the middle. It shows holograms.

An advanced version of the Omnitrix with the DNA of Aliens outside our own Galaxy.

When the Ultimizer was sacrificed, King Julien giving the remained Ultimatrix called Ultramizer. As she place her new body, she gained the 10 brand new aliens and the new feature called Super Ultimate Form. However, it is offline by Azmuth after given the rebuilt and modified Omnitrix.

After the Ultramizer is offline, Eureka giving the his old, rebuilt and renewed Omnitrix to her husband.

The new model made by Azmuth in Ben 10,000 How It All Started.It gives Ben 10,000 the ability to become Ultimate Ben.In Ultimate Ben he gains the alien's ability not their form also.

The Trix created by Hover Mike in Ray 10. In the first season is a watch, but in the second season is more like a remote.

the real omnitrix ha a square hologram.and green lines on it,and it's white.

-Azmuth had high hopes it would not be taken or thrown off course to a distant plant with a exact copy of the green Omnitrix, however, he did not expect for it to land on the wrist of a Girl since the first time around the Original Omnitrix landed on Ben Tennyson's wrist. It turns any alien into it's water Counterpart.

When an experiment goes wrong, a backpack can talk and change people into aliens using of the Omnitrix.

A Sonorasian named Echo Echo has the original series stuck on his arm by mistake when Cannonbolt showed it to him. 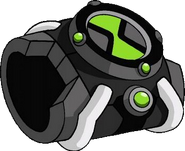 Omnitrix before recalibration
Add an image to this gallery
Retrieved from "https://ben10fanfiction.fandom.com/wiki/Ben_10_Fan_Fiction_Wiki:Archive/Original_Omnitrix?oldid=798649"
Community content is available under CC-BY-SA unless otherwise noted.