NRG (pronounced "Energy") is a new alien from Ben 10: Ultimate Alien. He was scanned from P'andor in Too Hot to Handle. He was first used in The Forge of Creation.

In Ultimate Alien, NRG is a humanoid alien made of pure, red, radioactive energy contained in a heavy, oven-like suit that is capable of containing high levels of radiation and heat.

In Omniverse, NRG now has a handle on his head and his shoulders have bolts. He has 3 more bolts on each hand, and two on his chest. Inside his suit, his true form wears two straps, a belt, two wristbands on both arms, and two knee braces on both legs.

While in his armored form, he wears the Ultimatrix/Omnitrix symbol on the chest seal of his armor, and in his true form, the Omnitrix is on his belt.

In Ben Ten: Enter the Ultimatrix, he has his Omniverse appearance but the orange coming from inside the suit is green, the light gray is green, and the dark gray is black. On the inside there is no clothing.

In Legion Of Ultimate Superheroes, he has his Ultimate Alien appearance.

In Ben 10: Legends of the Omnitrix, his suit has an actual face. He has a hole in each hand. It is unknown what he looks like under the suit

Mad Ben's NRG looks similar to Ben Prime's, but has orange spikes on his lower arms, shoulders, legs and hands. He has a gray plate on his grill and a spiky handle. The light coming out of the grill is orange, much like his Omnitrix symbol.

In Enter the Ultimatrix, the same but orange-red replaces orange, just like on all other things Mad Ben-relataed in that series.

NRG is a walking nuclear reactor. Like the other Andromeda Galaxy aliens he represents an element, in his case, fire. The energy he radiates enables him to generate intense heat through his suit, which will glow red with heat, and melt through solid metal and rock by merely touching it. NRG is also capable of firing highly radioactive energy beams through the vents on his helmet which can corrode and melt metallic objects as well unleash explosive power against his enemies. He can also channel his heat through the ground, resulting in massive geyser of magma. Also, his suit allows him to enter hazardous areas and provides protection against fire, flame, heat and radiation (though none of those things could hurt him anyway due to him being made of energy). The only thing shown to cut the suit is Taedenite, as it is extremely durable.He can melt something with his power.He can also came out from his suit.

He is scanned from P'andor by the new Coretrix, and he is used immediately afterward.

Spongebob 10:Adventures of the Epictrix

He first reappeared in Pyromaniacs when he was on Pyros.

NRG first appears in Unlucky Charms to attack Zs'Skayr. He escapes his containment suit and successfully frees the Ledgerdomain souls from Zs'Skayr's control.

He is voiced by Dee Bradley Baker.

He has his UA appearance but with the OV helmet. He is used twice by Albedo in Double Trouble (Super Omniverse).

He has his Ultimate Alien appearance but with his Omniverse helmet. He and his true form appear in Surge of Excitement: Part 1 to fly to Max's Plumbing.

﻿He appears as a normal alien, and, in one episode, came out of his suit.

NRG reappears in Ben 10: Gigatrix Chronicles along with the other Andromeda aliens.

NRG, or Sub-NRG as he was renamed, was scanned from the radiation left from when the Sub-Energon Z-Cube blew up.

In Finn 10: Fusion, NRG now has black shoulders and thumbs. He can also shoot lava from his three eye things.

Zac 10 Master of the Ultimatrix

Return of the Brotherhood (2x, used by Zac)

NRG will appear only one time and his appearence will be very brief.

The Adventures of Clockwork and Eatle

NRG appears in the episode Radio NRG, as one of Clockwork and Eatle's friends. He constantly helps them fight Kickin Hawk and their other enemies. When Kickin Hawk captured him in Drained Dry, his powers were stripped away from him, but he managed to get them back. He also helped Clockwork and Eatle defeat the Evil Scientist in The Dimension of Danger .

in BT:WWG NRG has a yellow nuclear hazard molded grate to fir beams like a gatling gun, on his chest. He also has gren paint around his six-grated visor and on his arms. he has openings on his hands to fire radiation blasts. As ben becames amnesiatic he doesn't know how to exit his suit. He will appear at some point in Season 1. he is also the third osuafomni alien that returnd to WWG. the other two were Diamondhead and Echo-Echo. 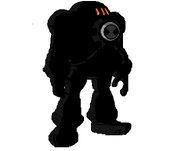 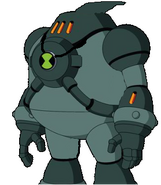 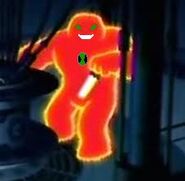 NRG without his suit in BTMT 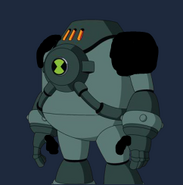 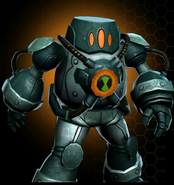 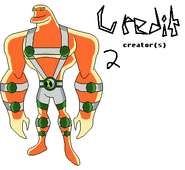 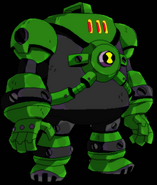 In BTANS out of suit 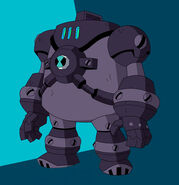 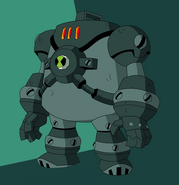 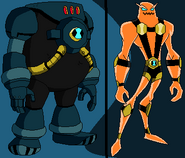 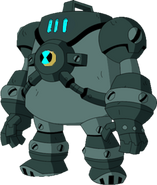 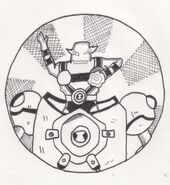 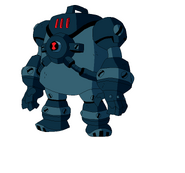 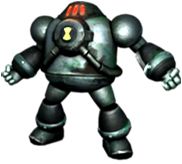 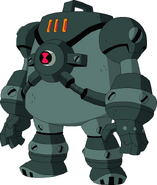 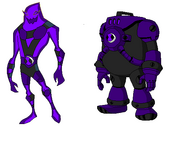 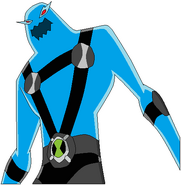 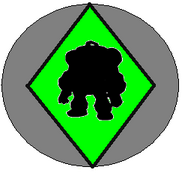 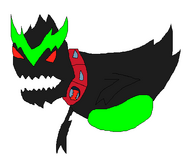 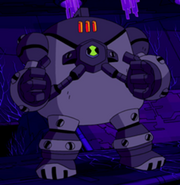 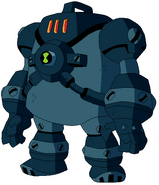 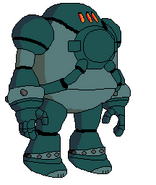 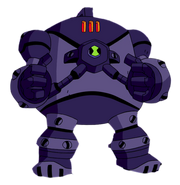