Jury Rigg is the Ultimatrix/Omnitrix's DNA sample of an unknown species. In Ahmad 15 and most of Ahmad's other works, he is a Mosalihateymkhareb (Being a play on transliterated words "Mosalihatey", and "mkhareb", in informal Arabic, meaning Fixer and Breaker respectively) from an unknown planet. In the Ben 10: Ultimate Alien Season 3 DVD, the special features state that he is a Planchakule (Note: the U is supposed to have to dots).

Jury Rigg is a small, red, devil-like alien who bears a close resemblance to a Gremlin/imp. He is very small, as when he was next to Gwen he was almost as big as her head, excluding the tail. He also seems to be a little taller than Grey Matter, but smaller than Upchuck. He wears the Ultimatrix symbol on his chest.

In Omniverse, Jury Rigg now wears an aviator's outfit which comes with an ascot. He looks more red. He now has pupils. His ears are now spiked and his nose is bigger. He also has a spike on his chin and one near each of his eyes. The Omnitrix symbol is now on his waist.

In Ben 10: The Omniwars, he has his Omniverse appearance, except for a green ascot, and he wears the Omnimatrix IV on his aviator's hat. Negative Jury Rigg has his Ultimate Alien appearance, but with a paler red to his skin, and a black and red suit.

In Ben 10: Unbound, he has his Omniverse appearance but suit colors are reversed, smaller spikes on head, no ascot and the Omnitrix is on the chest.

In Legion Of Ultimate Superheroes, he has his Omniverse appearance.

Jury Rigg can break or fix machinery at very fast rates. His strong desire to break rather than fix makes him difficult to control. However this was soon solved when he gained a bit of control allowing him to fix.

His powers can go out of control, due to his strong desire to destroy machinery. This was solved when he managed to control himself, repairing machinery instead of destroying it.

He is first used in Ken 10: The Cybot Factory, when he reporgramed the cybots.

He has his Omniverse appearance, but without his aviator cap. He appears in Malware Lives! to destroy Malware's evolving machine and rebuild it into a laser cannon.

Jury Rigg will be in Ben 10: Superverse but he will not be used by Ben on his first re-appearence.

His look is the same in Ultimate Alien.

He make his Ultimate Battle debut in A lot of more Things Change:Part 1

In A lot of more Things Change:Part 2

He return in Prisoners

Ben first uses Jury Rigg in Let War Commence, Pt 2 to create a robot that is made of the remains of Vilgax's drones. This looked very similar to the one he made with the Mechaneers, but it was much larger. He uses an atomic dissipator to completely obliterate Vilgax's large robot.

Albedo first uses Jury Rigg in Swapped to construct a prison for Kevin (who was in Ben's body) as Rath.

He is voiced by Bumper Robinson (for Ben), and Dee Bradley Baker (for Albedo).

The Adventures of Crimson

Jury Rigg has a backpack, goggles and red fur. he is portrayed by Jimmy Vee.

Upgrade vs Jury Rigg by UH 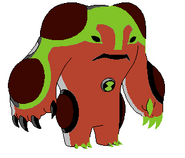 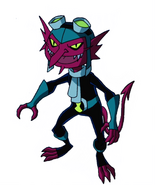 Bryce as Jury Rigg in B10UH/BBO 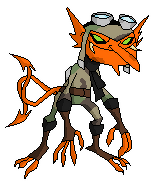 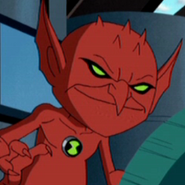 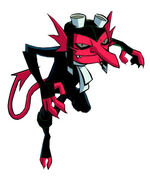 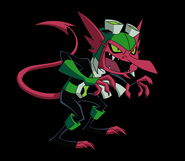 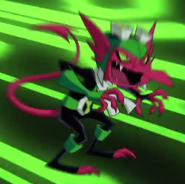 Add an image to this gallery
Retrieved from "https://ben10fanfiction.fandom.com/wiki/Ben_10_Fan_Fiction_Wiki:Archive/Juryrigg?oldid=847436"
Community content is available under CC-BY-SA unless otherwise noted.
FandomShop Newsletter Join Fan Lab