Goop is the Omnitrix's DNA sample of a Polymorph from the planet Viscosia. Ben first turned into him in the episode The Gauntlet, when battling against a Techadon robot.

Goop is a humanoid pile of goo that can take any shape at will.

Goop has an Anti-Gravity Projector that allows him to be mobile in Earth's gravity and also projects his voice.

In Alien Force and Ultimate Alien, Goop wears the Omnitrix/Ultimatrix symbol on his chest.

In Omniverse, Goop has a nose-like beak and he has an amoeba-like shape. His Anti-Gravity Projector has been redesigned, and the Omnitrix symbol is on the top of it. When Goop speaks now, a crackle of static is heard at the end of each line as if he is speaking through a walkie-talkie.

Albedo's version of Goop is red and has no beak.

In Ben 10: The Omniwars, he has his Alien Force/Ultimate Alien appearance, but the Omnimatrix IV symbol is on his Anti-Gravity Projector, which is now black with a green stripe going across it. Ben 10,000 as Goop has his Omniverse appearance, but with a greater muscular build.

In Ben 10: Unbound, he has his Omniverse appearance but longer legs making him appear more humanoid, AF/UA anti-gravity projector, no beak and the Omnitrix is on the chest.

In Legion Of Ultimate Superheroes, he has his Alien Force/Ultimate Alien appearance.

In Ben 10: Enter the Ultimatrix, he looks like in Omniverse but the head is shaped like in Ultimate Alien. Also, the dark green in the middle of his chest seems to have a lighter green number 10 on it.

He is a shape-shifting, self-regenerating, almost indestructible green blob that weighs 200 pounds. Goop can wrap his slimy body around his foes and throw them around. Ben usually becomes Goop to avoid damage or needs a flexible form. Goop controls his slime with an Anti-Gravity Projector in a shape of a small UFO, and if the slime and the UFO are separated at least two feet, the slime will become inert until the UFO recollects it. Goop's voice comes from his UFO. The UFO can cause the slime to take any shape and even hover off the ground, and nothing can cut through goop. He can imprison someone inside of the slime, as seen in Good Copy, Bad Copy, Above and Beyond, and Primus. Goop is also able to fire off his slime, which gains powerful acidic properties upon impact as proven in Simple when he just transforms and says the first two letters and hits the ground. He can also turn solid.

As potent as Goop is, he is plagued by the weakness of being limited to the very vicinity of the UFO controlling the slime. If it is so much as separated by Goop by more than two feet, the goo goes completely inert. The UFO must fly back within close range of the goo in order to reanimate it. It was shown in Primus that Goop's anti-gravity disk can be turned off with a push of a button, causing Goop's body to become inert. This was shown when Vilgax was tricked by Ben to turn into Goop to get the Omnitrix back. This weakness may or may not be in the Ultrimatrix. This form is also not too popular with Kevin and Gwen, as they both think it's disgusting. This is/was not helped by the remark made by Ben in Vengeance of Vilgax: Part 2. ("It's a sewer, of course there's Goop down there.")

When Goop turns solid, he can be broken apart, but he can regenerate.

Goop can be easily defeated if someone pull off his omnitrix. That weakness was removed in Omniverse,because his omnitrix simbol is now on his anty-gravity projector

It was revealed that Goop wasn't in Ben's original 10. In Science Class,Ben dropped some goop on the Omnitrix. Ken lost control of Goop once, but managed to save himself.

In Jack 10, he can absorb water to grow bigger, and he can also shoot the water back out.

In the series Ben 10 Xtreme Power, he appears as an original alien.

He has his UAF appearance but with bubbles inside him. He appears in The Strange Case of Mr. Pesident and Ben 10! to escape a holding cell. He appears in My Ex to defeat Fistina but failed.

In Thorn 10, Goop's body is now blood red and the anti-gravity projector is black.

In Akira 12, Goop is thinner than Ben in his Goop form. Her body is purple and her eyes and omnitrix are light purple.

Goop appears in Ben 10: Superverse and has a super version of himself known as Super Goop.

goop will be in vilgax 11

He is named by Evan and has only appeared in The Watch to imprison a Techadon robot.

Goop doesn't have an Antigravity UFO thing. Instead, he has small nanochip like devices that allow him to use his powers. They flow with his body, since they're microscopic.

In Divide And Be Conquered, Goop battled Kraab. 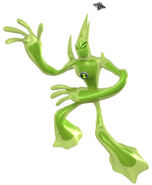 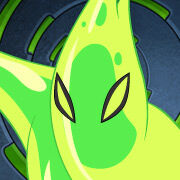 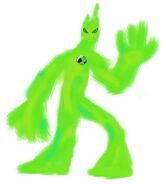 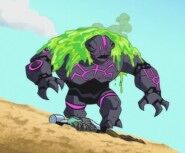 Albedo as Goop in Omniverse

Goop as he appears in Bryce Bowman: Origins 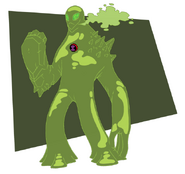 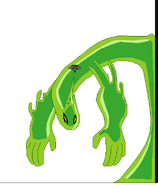 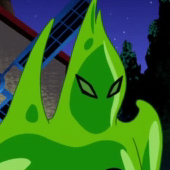 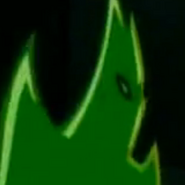 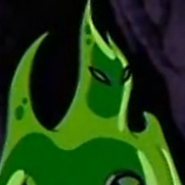 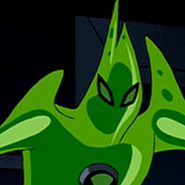 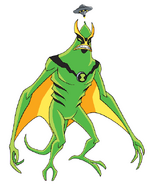 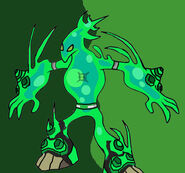 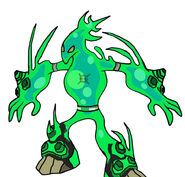 Credits to Echo
Add an image to this gallery