Galapagus is one five aliens who were captured by Aggregor. He is from a peaceful planet called Aldabra. He is the Codon Stream's DNA sample donor for Terraspin.

Galapagus's powers include the following: he can jump up in the air and his arms and legs will start spinning like helicopter blades. His powers are based on wind and flight. He has a lighter skin color than Terraspin does. He is also very strong, able to rip a street pole out from the ground and swing it with ease. It seems that Galapagus's species have retractable claws to use as fingers. Despite his peaceful nature, he has shown he can be very capable in battle upon learning how to fight.

He first appeared in the Ben 10: Ultimate Alien episode Escape from Aggregor, when he goes on a rampage. While Ben, Gwen and Kevin are fighting Dr. Animo, he attacks their hometown of Bellwood.

He shows to be able to hold his own against Kevin, Big Chill, and Ultimate Big Chill. Eventually, Gwen realizes that with all the power he has, he hasn't harmed anyone and suggests to Kevin to use his Plumber's Badge(which works as a universal translator) to allow Galapagus to talk in their language. He then explains that he went on his rampage in hopes that he would draw the attention of the famous Ben 10 who he begged to help him get back to his home planet. He explains the tale of how Aggregor attacked his home planet, captured him, and imprisoned him with four other aliens: Bivalvan, P'andor, Andreas, and Ra'ad.

When the five attempt to escape Aggregor's ship, Galapagus suggests using his communicator to send out a distress message, and was assisted by Bivalvan and Ra'ad. Even though he and the other aliens are put back in the cell, Galapagus's S.O.S. message is heard by Magister Prior Gilhil, who boards Aggregor's ship and finds the five aliens, only to be attacked from behind by Aggregor. Bivalvan, P'andor, Andreas, and Ra'ad manage to escape again, but Galapagus seemingly betrays them to Aggregor in exchange for his own freedom. When Aggregor admits he wasn't going to free Galapagus, the Aldabraian admits he didn't intend to betray the others and leads the escape to the shuttle which Aggregor shoots down and causes to crash on Earth. Afterwards, Galapagus, P'andor, Andreas, and Ra'ad each split up to find a way off the planet while Bivalvan stays with the shuttle and attempts to repair it. After Ben samples his DNA for the Ultimatrix, he has Galapagus taken back home in a Plumber spaceship. However, Galapagus finds out the pilot is Aggregor in Ghilhil's Plumber suit. Galapagus is seen at the end of Andreas' Fault as Aggregor puts Andreas inside a statis pod along side him, Bivalvan, and P'andor.

Brendan, wielder of the Modelatrix

He first appeared in A little something new…where he was abducted by Jared and put under mind control, Brendan as Starrydactyl managed to defeat him, Brendan asked Galapagus if he would like to join Brendan's Team, in Together as one, he said yes.

He appears as a member of The Ultimates. It is known that Kurt has meet him offscreen and helped him. 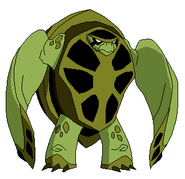 Galapagus in Ben 10: Negative Rising
Add an image to this gallery