Frankenstrike can generate green electricity (which is purple for native Transylians) and manipulate the resulting energy to attack enemies, or adhere himself to metal through electromagnetism. He also possesses enhanced strength and intelligence. Frakenstrike has two conductor coils on his back which can generate the electricity. He also has a power pack on his back.

In John Smith 10, he can release a cord from his back, which allows him to interface with technology.

Frankenstrike is a strange humanoid alien resembling Frankenstein's Monster, with big, bulky conductors on his back, and his chest and arms are covered in bolts. In most series, he often wears dark pants.

In Ben 10: Protector of the Omniverse, he looks like his original series self, but his Infinimatrix symbol is on his chest and is recolored. His hair is a little shorter and his gloves, belt, the bottom of his boots, and the left conductor on his back are green.

In Ben 10: Heroics Unleashed, he has his Omniverse appearance, but with his original series head and facial features. He no longer has stitches, and his body is the same color as his Ultimate Alien self. His Codontrix symbol is on his chest instead of the left of it.

In Ben 10: The Omniwars, he has his Omniverse appearance, with several changes. The first is his hair, which is reminiscent of his original series mullet. He has more scars and stitches on his body. His teeth have become sharper, but they do not bear out anymore. His gauntlets are black with green stripes, and he does not have bolts on his elbows. His pants also include green stripes. The Omnimatrix IV symbol is now on his left pectoral, with more vein-like scars surrounding it.

In Ben 10: Unbound , 16 year old Ben as Frankenstrike has his Ultimate Alien appearance but shorter hair, Omniverse skin tone and gloves are black with green stripes. He has stiches and scars like in Omniverse and he is buffer. 11 year old Ben as Frankenstrike has original series appearance but green eyes, recolored Omnitrix and Ultimate Alien skin tone.

He is a doctor.

He is set to appear in Season 4

Frankenstrike first appears in We The Conquerors to fight Lord Transyl.

He is voiced by David Kaye.

He was scanned from Dr. Viktor in Terry 12: The Ghost King.

In BTKR, Benvicktor has longer hair and a metallic plate on his chin.

Benvicktor was unlocked when John scanned Vicktor in Vicktor: The Spoils (John Smith 10). His name in the story is Vicktor Stein.

Vicktor Stein first appears as an enemy in the Northern Crater.

He looks exactly the same in OS,but with darker skin.And he has a new name,Frankenvictor.

Frankenstrike is still called Benvicktor in the series. Ben first used him to fight-off some of Animo's mutated grasshoppers and flies in Heatblazed, Part 1.

Frankenstrike goes by a new name: Vicktor Strike. He does not wear the Omnitrix.

Has its OV appearance, only with bigger eyes, and gloves. Larger hair.

Frankenstrike in the original series 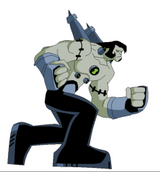 In Rory 15 and he is called Thunderstein

Bryce as Vicktor Strike in BBO 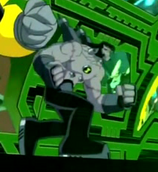 In The Incredible Ned

Retrieved from "https://ben10fanfiction.fandom.com/wiki/Ben_10_Fan_Fiction_Wiki:Archive/Frankenstrike?oldid=702904"
Community content is available under CC-BY-SA unless otherwise noted.