Feedback is the alternate version of Ben 10's Feedback in Ben 23.

In Ben 10: The Omniwars, he looks like 11-year old Ben's canon Feedback, but there are no bolts on his shoulders. He has lost his tail. His skin is still black, minus his chest, which is now blue. 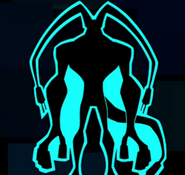 Silhouette in Store 23
Add an image to this gallery

Retrieved from "https://ben10fanfiction.fandom.com/wiki/Ben_10_Fan_Fiction_Wiki:Archive/Feedback_(Dimension_23)?oldid=809283"
Community content is available under CC-BY-SA unless otherwise noted.