Eon is the main antagonist of the live action movie Ben 10: Race Against Time, and he is capable of manipulating time. He once attempted to take control of Ben by putting his DNA into the Omnitrix. He is a Chronian from the planet Chronia.

In Race Against Time, Eon is an old Chronian that wears a black helmet with a purple tinted visor. His main outfit is a black bodysuit, over which he wears a long black coat. He also has black gauntlets with purple highlights on them. When Ben becomes a copy of him, he lacks the helmet.

In Ultimate Alien, Eon wears a silver helmet with a purple visor that blocks all view of his face, leaving only two glowing purple eyes visible. He retains the black bodysuit, but has silver boots, gauntlets, and a chestplate instead; a purple cape is also hanging off his shoulders. He is actually an evil version of Ben 10,000.

In Omniverse, Eon appears to be highly advanced in age (or just repulsive in appearance). He retains the black helmet with its purple visor, but his face is visible through it, much like in Race Against Time. He retains the silver gauntlets and boots, but there is also silver shoulder pads on his black jacket. He wears a black bodysuit, which has some purple lines and a silver collar that covers his entire neck.

In Ben 10: The Omniwars, he has his Omniverse appearance, save for lighter skin and different teeth. The purple visor is now a whitish-purple, and it covers his entire face once more. His shoulder pads have been removed, and the suit under his jacket has a different design, with two Omnitrix-like arrows going opposite ways.

In Ben 10: Negative Rising, he retains his Omniverse appearance for the most part, the only change being chrono-advancements built into his gauntlet.

In Ben 10: Unbound, he has his Omniverse appearance but the mask covers his whole face again and wears a outfit similar to his Ultimate Alien outfit.

Eon appeared in Ben 10,000 Returns, where he fought a future Ben (20 years in the future), as part of his plot to be sent back down Ben 10,000 timeline so that he may remove that Ben from that timeline, and enslave him, so that Eon, who was revealed to be a Ben gone rogue and wanting only to be the sole Ben in all of the space-time continuum, would finally reach his goal. In the end, Ben 10,000 distracted Eon so that 16-year old Ben was able to use Jetray to destroy the Hands of Armaggedon, which sent all the already-enslaved Ben's (who were revealed to be Eon's minions) back to their individual timelines with no recollection of being controlled by Eon.

Eon is the biological father of Vicktor Vandravel. Paradox explains in the Ben 10 Ultimate Alien episode Ben 10000 Returns, when Ben broke the Hands of Armageddon, it destroyed Eon. However, the Eon they were fighting was simply an alternate Ben, not the original. Paradox also explains that the Eon in Race Against Time was also a fraud. The real Eon was much more powerful. When Ben destroyed the Hands, it killed the real Eon. However, the Hands rebuit itself, ressurecting Eon on the process.

He was the main villain of BTMT Season 2. He assembled the equivalent of an army with Evil Gwen (a clone of Gwen), Evil Kevin (made from the remains of Phil/Devin), and Albedo (forcibly turned evil after turning good). However, he was killed in the season finale as his ship blew up. He is confirmed not to return in BTMT or its sequel.

Eon appears as the main enemy for Ben 10,000 and his son, Kenny. He makes his The Omniwars debut in Away from the Future, in which he used the temporal beasts and his time ability to create his own timeline. He eventually escapes from the timeline after Ben as Diamondhead damages Eon's suit, causing him to wither in age.

He reappears in A Man, My Son to hunt down Ben 10,000 through time. 10,000's son, Kenny, attempts to stop him. He is later defeated by Kenny and Ben after they use Echo Echo and Eye Guy to send Eon back into crosstime.

He will make another appearance in the season 3 finale, planning to destroy all dimensions so that he can be the only Ben in existence.

Eon had died prior to the series but was resurrected by the Army of Animo in The Resurrection of Anubis (only his shadow was shown). Eon was an important enemy at the end of the second season. He revived the Negative 10 with a complete new set of villains, all the greatest enemies from different timelines and periodes of the Ben's in the Multiverse. It was later revealed that he was secretly working with Exodia, who quickly absorbed Eon and his minions. 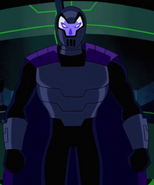