Start a Wiki
ChamAlien is a Merlinisapien from an unknown planet and a new alien that appeared in Prisoner Number 775 is Missing. His DNA was unlocked by Prisoner 775, who was turned over to the Plumbers and scanned by Ben. When used, he yelled his name as "Overkill" as a joke from the beginning of the episode. Some people insist that he is Overkill, but his name has been confirmed as ChamAlien. He returned in The Flame Keepers' Circle, but didn't shout his name when he transformed.

ChamAlien has a slim body that resembles a large gray lizard with darker gray camo-esque spots all over his body and a short tail. He has three triangular eyes, the left being blue, the right red and the top green, but the red and blue eyes are the only ones that blink, while the green eye doesn't. The top of his head is dark-purple, with a spike-shaped fin on the back of his head. He has four-fingered hands and three toes on his frog-like feet. He also has a wide mouth with sharp teeth and speaks in a high-pitched German accent. ChamAlien wears the Ultimatrix symbol on his chest.

In Ben 10: Unbound, he has Ultimate Alien appearance but has all green eyes. He wears a black and green suit. His tail is longer. His fin is a bit sharper.

In Legion Of Ultimate Superheroes, he has his Ultimate Alien appearance.

In Stan 14 he is known as Overkill, but later it's ChamAlien.

In both Ven 10's, he is called Overkill.

Albedo first transforms into ChamAlien in Mirror on the Wall to pass through the security at the Techadon factory.

Ben first transforms into ChamAlien in Six-Seven-Eight to prevent traps in the temple of Ah Puch from activating.

He is voiced by Dee Bradley Baker (for both Ben and Albedo).

He now has Green spots and stripes. He appears in Dimension Destruction: Part 1 to try and ambush Evil Ben but failed. In The Strange Case of Mr. Pesident and Ben 10! he sneaks through the air vents. He appears in The Faction Return to climb an elevator shaft. 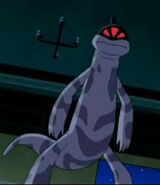 In BTANS
Add an image to this gallery

Retrieved from "https://ben10fanfiction.fandom.com/wiki/Ben_10_Fan_Fiction_Wiki:Archive/Chamalien?oldid=847504"
Community content is available under CC-BY-SA unless otherwise noted.