Ben Tennyson is the Dimension 23 counterpart of Ben Tennyson, and first appeared in the Omniverse episode Store 23. Since then, he has appeared in various spin-offs revolving around him, such as Ben 23.

In Ben 10: The Omniwars, he has his Omniverse appearance, but has gotten taller. His shirt is black, while his vest is a light blue. He still wears the chain on his neck, but it now has the number 23 on it. His pants are now a dark blue. His hair is also now slicked back.

In Ben 10: Unbound, he looks the same but is taller, no earings or vest and wears Ben's Alien Force/Ultimate Alien clothes and jacket but the shirt is blueish-blackish, his pants are slightly a lighter shade of blue and the jacket is blue and the "10" is replaced "23" . He wears the Hero Watch which nows looks like the recreated Ultimatrix on his right wrist.

Ben wields the Hero Watch, allowing him to transform into different aliens. However, his naming of aliens is different than his mainstream counterpart, as well as there color schemes.

In Ben 23: Alien Force he now wields the Gyromatrix.

In Ben 10: The Omniwars, he wields a recalibrated form of the Hero Watch, which looks like his dimensional counterpart's Omnitrix when it recalibrated in Alien Force.

Ben 23 will join the resistance in season 2. He will be a major part of the group onwards.

A younger version of him appears in the Dimension 23 episode Ben 23.5?.

All of the aliens that have been unlocked by Ben Tennyson in Ben 10.5. Also:

He is the main hero of the series, so this will show episodes that he does not appear in. Ben is now 16 and has matured some since his encounter with Ben 10. He has changed most of his aliens names to what we would consider 'normal'. Ben gave his entire franchise away to Mr. Bauman to make up for all the trouble. Azmuth, noticing these mature decisions, gives Ben a new Omnitrix, the Ultimatrix.

His secondary outfit in Ben 23

His third outfit in Ben 23 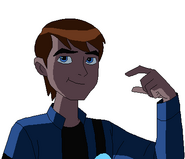