Ben 10: Reboot Revolution is a series by Aaronbill3 that follows Ben Tennyson's trouble after the end of Death of Ben 10. It also immediately follows the events of Ten Over Ten Thousand.

Apollo is finally defeated, and the multiverse is safe at last! ...Except for the part where it isn’t.

Rook, Gwen, Kevin, and Grandpa Max gather in Bellwood to help celebrate Ben’s victory over Apollo and saving the Earth again! But why is there a 10 year old child wielding the Omnitrix in Ben’s absence?

Ben finds himself stuck in the past! It has to be his own past, it couldn’t be anyone else’s, but everything is so different? His Omnitrix is definitely the one he had before… But why is everything so wrong? 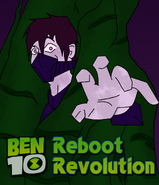