Ben 10: Lost Galaxy is a fanon American cartoon series based on the Cartoon Network Character, Ben 10 and developed for this wiki by Regular Guy and Developer's Journal. In terms of tone and style, the series is based loosely on the original stories by Man of Action but, with a similar balance of action, drama, and comedy as well as a middle school/summer vacation setting. However, it will also utilize material from all eras of the series run and other sources such as the film series, video games, and the comic books. The show also uses a similar techniques seen in the show The Twilight Zone, were episodes have themes that act as social commentary about the real world and an opening and closing narrations usually summarizing the episode's events in tones ranging from cryptic to pithy to eloquent to unsympathetic, encapsulating how and why the main character(s) had "entered the Lost Galaxy". It is currently in production.

The first seasons of the series is set during the seasons of autumn and winter; from September to late December.

In secret for years, the Galvans have created an all powerful weapon code-named, B.E.N. (Bio Energontic Network). A humanoid energy being with the power to configurate it's DNA into powerful alien lifeforms. A Bounty Hunter named, Tetrax, his "space-monkey" sidekick, Bobo Haha, and an escaped convict, Gwen Tennyson, are hired by Vilgax, a Chimera Sui Generis Warlord, to steal the weapon for his own purposes. They are intercepted by Agent Six, a highly advanced Plumber agent. A huge battle insues which leads Tetrax, Bobo, Gwen, Azmuth, and Myaxx, and B.E.N. to crash land on Earth. They are branded as treasonists criminals against the Galaxy at large. Now that they are all fugitive, stranded on Earth. Hiding in secret to the Earth population. But not only are the plumbers after them, Vilgax is too. Friends or not, the group must band together to escape Vilgax and the corrupt Plumbers. Earth has now became a battlefield and no one is safe. Their only hope is...B.E.N.

Ben 10: Lost Galaxy is a new series created by Developer's Journal, or Regular Guy. Lost Galaxy was his first Ben 10 series. With Regular Guy, came three writers that he had just meet. 6jackb, Rob Macaroni, TomasFMaggi. The three of them, along with Lost Galaxy story editor Krosskothen and producer Fish Hook made up the writing team for the 32-episode season.

Production on the series began on February 29, 2012, though the idea had been conceptualized earlier, in mid-December, 2011. After watching an episode of the Twilight Zone, "The Monsters are due on Maple Street", creator Regular Guy speculated as to how the technique of a theme to each episode might unfold on Ben 10, involving members of the franchise. Initially, the main character was set to be Tetrax, would crash to Earth and be abducted by Vilgax, leaving the Plumbers and Ben's Team to rescue him. The series would be set sometime during 10: Alien Force season three, after Vengeance of Vilgax: Part 2 and before The Secret of Chromastone.

After Regular Guy decided to write the series, his initial conceptualization was adapted so as to allow the story to fit into a different universe of Ben 10, replacing some of the main characters of the series with other existing characters. All other details of plot are to be kept secret, until a time when they are no longer spoilers.

"The logo for the series is done by the talented, Static, who has been making some very good logos. I hope his Logo Service gets more of publicity it deserves. Hmmmmmmm, if you want a logo for a series just ask him. He even did a amazing logo creation for a A Hit Series. So don't be afraid to ask him." -- ٩(͡๏̯͡๏)۶ Regular Guy Link:Static's Free LOGOS! [1]

On May 6, 2012, a Prelude for the show was release on to the wiki. It was written by TomasFMaggi and Directed by Regular Guy. The prelude takes inspiration from various soucres and elements. The prelude plays a major part in the storyline of the series. It can be read here: LINK. [2]

Adventurous is the second Lost Galaxy Trailer. It was released on June 9, 2012. It is narrated by B.E.N. with some lines from both White Knight, Douglas, and Cooper, respectively. 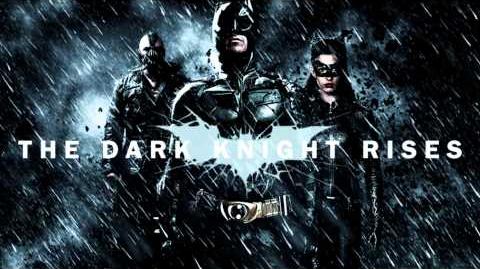 Prologue to the Lost Galaxy

The show was promoted in May 2012, during which a teaser trailer narrated by the main characters of the series and David McCallum was released followed by an introduction of the cast (via trailers).[3]

A cold-hearted bounty hunter who only cares about getting the job done and getting his pay. It will take him awhile to operate with a team.
Voiced Actor: Dave Fennoy

A talking monkey who doesn't know when to shut his mouth. He is much like his Generator Rex form.
Voiced Actor: John DiMaggo

A Twenty-year-old Human/Anodite (who has been going by Gwendolyn since college) is the smart, girl of the group. She was convicted for unknown reasons. She acts like a sister to B.E.N. and cares for the whole group.
Voiced Actor: Tara Strong

The creator of B.E.N., Azmuth will do anything to protect his prize possessions. He views B.E.N. as a weapon/object and doesn't understand why Gwen thinks of him as a human boy. He hates Tetrax and Bobo, and thinks that they are brigands. He is keeping a secret from the crew that could get them all killed.
Voiced Actor: Jeff Bennett

Myaxx a coward who would gladly try to run away if she had the chance. She looks at the bad side of every situation. She enjoys human soap opera.
Voiced Actor: Vanessa Marshall

The almighty weapon is just a boy. He is powered by Green Matter (a powerful substance). His human appearance is made from the corpse of a Earth child named, Ziah . He is a mystery, even to himself. Due to the Green Matter energy, and the connect to Primus, he is able to transform into various alien lifeforms.
Voiced Actor: Tara Strong

Daniel Cooper a ten-year-old. He attends the same school as Ben and the two are close friends. He is a comic book geek, and loves superheroes. He is secertly jealous of B.E.N.
Voiced Actor: Cathy Cavadini

Lt. Steel is a black-ops operator who is the head of SACT which stands for Special Alien Containment Team. He helps the group from time to time (because he is unaware that they are all aliens)
Voiced Actor: Michael Gough

Max Tennyson, a former plumber, has lost everything. His Anodite wife, Verdona Tennyson, and his beloved son, Kenneth Tennyson. He quit the Plumbers to "start over". When Gwen came to Earth as a little girl and he found her, Max saw it as a chances to to start over again (since Gwen was an Anodite, which reminded him of his wife, and she was a kid, which reminds him of his son). Around the age of twelve, Gwen left Earth without telling Max. This has left him heartbroken and once again, lonely.
Voiced Actor: Paul Eiding

Doctor Jefferson is a college professor who works the prestigious Bellwood University. He quite an obsession with science, biology, and cross-species genetic.
Voiced Actor: Michael Trucco

Vilgax is a cunning Chimera Sui Generis warlord, who seeks nothing but power. He is cold-blooded and ruthless, though also calculated and intelligent. He has inslaved his entire race, in a effort to serve him. He is after B.E.N. He wishes to use his power to destory every race (besides his) in the galaxy and make his race superior.
Voiced Actor: Steven Jay Blum

Six Six is a bounty hunter who holds a huge grudge against Tetrax. He works for Vilgax very often and sees Tetrax's bounty as a chance to "even the score".
Voiced Actor: Dee Bradley Baker

Ramma the Slug ("The Boss" usually), born Arnold Prometheus, is a mutated human/alien hybrid. He runs illegal business throughout the galaxy, he controls major starship routes with his wealth and fear. He has a talent to manipulate people, like the Dynamic Trio, to commit crimes for him.
Voiced Actor: Alexander Polinsky

James "Smitty" Smith was a partner of Jackson Nelson and Kleiss Mercer during the explosion of their lab where he was brutally damaged. His assisant found his ruined body and rebuilt him with cybernetic technology into a black armored cyborg. From then on his name, was forever known as Disciple.
Voiced Actor: Ron Perlman

Disciple is the kidnapped son of Disciple. He was brainwashed into thinking his birth parents abandoned him, nor cared about him. He has underwent extensive training, both intellectual and physical, to the point where he reached near human perfection. He isconfused on the path he has taken and it clouds his judgement from time to time.
Voiced Actor: Scott Menville

The Plumbers have been a force for good in the galaxy for over 400 thousand years. Though the new era of the galaxy has corrupted them. Only a few stay true to the name "The Plumbers".

White Knight is the head of The Plumbers. He does not come outside and would rather stay inside a white box in an unknown location. White Knight is a very 'tough-as-nails' kind of guy and does not show emotion. He had his two sons fighting in the Air Support division during the battle to stop the bounty hunter from stealing B.E.N., though it was clear he held a lot more faith in his older son, Mason, to the point of asking Six to try to stay out of his brother's way when they went into combat. Unfortunately, during the battle, only Six survived. He sees The Plumbers as the new generation, a new force, a new rule.
Voiced Actor: J. K. Simmons

Agent Six is the son of White Knight. He always tries to make his father proud of him, but fails. He feels as if he is living in his late brother's shadow. He will do want ever it takes to win his father's approval.
Voiced Actor: Wally Kurth

Philip Coulson is an espionage agent working for The Plumbers. He is killed during the events in which a band of bounty hunters kidnapped a Galvan scientist.
Voiced Actor: Clark Gregg

Luthor was the CEO of Lex Corp, a sizable conglomerate based in New York. Behind the facade of honest business, Luthor also organized black market arms trades and other shady deals. He was the founder and first chairman of Unimus, and initiated Project Copy. He has connections to Project B.E.N.
Voiced Actor: Mark Rolston 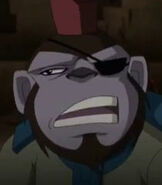 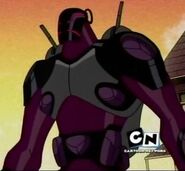 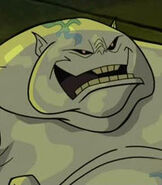 Ramma the Slug
Add an image to this gallery

Put your signature here if you're a waiting for this series!

Retrieved from "https://ben10fanfiction.fandom.com/wiki/Ben_10:_Lost_Galaxy?oldid=725561"
Community content is available under CC-BY-SA unless otherwise noted.