Barrier Reef is the Omnitrix's DNA sample of a Coral Titanoform from the planet Aquillis in Earth-1010.

Barrier Reef is a large humanoid creature with a body made of a coral-like material. His body has many sharp edges on top, and the Omnitrix symbol is on his forehead.

Barrier Reef's most notable ability is his ability to generate barriers of energy either around himself, or projected around someone or something else. These barriers can withstand a huge amount of damage but are not totally invulnerable, though the actual damage required to break through them could crack a small moon in half anyway.

He has highly enhanced strength and durability, as is befitting of his shape, size, and body composition.

He can breath underwater, though he cannot swim as he is too heavy.

Somehow, Barrier Reef possesses the ability to detect when nearby coral is in danger.

Being effectively made of coral, Barrier Reef is vulnerable to high levels of stress, which are capable of killing him. Whilst he is fine in most situations, things that can induce heightened levels include being exposed to elements outside of his comfort zone and being put into situations that overwhelm the user.

Barrier Reef is vulnerable to sonic attacks, as they can also highly increase his stress levels. Due to being vibrations in the air, sonic attacks still pass through his shields.

Barrier Reef's shields do not prevent changes in temperature from passing through via convection or conduction. Heat distributed by radiation is still blocked, though. He is also vulnerable to the cold. Being exposed to the cold does not stress him out, but it does slow him down and potentially force him into hibernation.

Barrier Reef's shield also allow water and air to pass through safely, though toxins may be blocked.

Rocky Blocker was used by Ben 23 in Chapter 11 to save Ben Prime from Apollo's fire. The shield prevented Ben from being ignited by the fire, though most of the temperature still went through it was not enough to kill him.

Barrier Reef is one of the ten aliens Ben received with the T2 Omnitrix. He was first seen when Ben watched the Alien Data Packets, and first used in Time Trials. He was used to solve the third Crucible vault trial. He later attempted to fight Haywire, but was unable to beat him.

He was used twice in Dead London. The first time he fended off a wild Bone Wraith on Cranvius. The second time he tried to protect the Ophidian pirates from the creature that MALtruant awoke, but it just walked straight through his shields. Barrier Reef was used again in Life On Mars to defend himself from an attack rush by Brave New World. He briefly held the upper hand in the fight before being knocked onto his back by the monster, almost being killed before being saved by Gwen pulling him out away from danger.

Barrier Reef was used in Tides of War to defend Marinium from the Electroviles. By accident, the form Ben chose was of huge significance to the Teslamorpha- weakening the morale of the Electroviles and inspiring the embassy guards to immediately join his side. 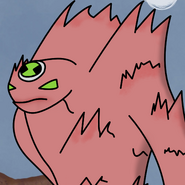