Music-Based Powers
The Balenti are a species from the planet Ossicorca Oceanus, and are Thriller Whale's species in Earth-2018.

Balenti appear as small, humanoid whales. They have two-toned color schemes on their bodies, as well as small barnacles. 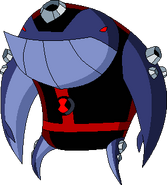 Thriller Whale (Earth-1799.A)
Add an image to this gallery
Retrieved from "https://ben10fanfiction.fandom.com/wiki/Balentis?oldid=837880"
Community content is available under CC-BY-SA unless otherwise noted.