BTFF Fall is a MMO game by Redo and Brandon based on the Cartoon Network game: Fusion Fall.

In this game, help your favorite BTFF characters to fight against some nasty villians from their shows. After defeating a specific villian, you will gain a nano made from "Nasty Matter". Any user can add their series NPCs, Villians, Nanos, and even merchandise! Trixeos are used as currency.

It's an average day in the universe of BTFF until an alien lifeform is determined to absorb every planet in the galaxy including Earth. The Heroes of Earth then stand up against the alien known as The Nast but it is too powerful to overcome. A new hero is then choosen to aid the heroes in their quest to save the Earth against The Nasties by solving missions, defeating baddies, gearing up and gaining nanos. The Battle for Earth has just begun! 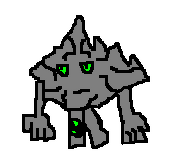 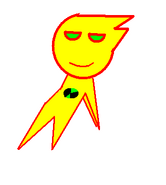 Flame Nano
Add an image to this gallery

Tyran can jump to the sky!

Tyran scares the monsters away from your stuff!

Explodio turns into a hidden bomb!

When you kill the monsters, no point in wasting their health!

Your group can float with a bubble!

Bubble Trouble will trap the monsters in bubbles!

Bubble Trouble's bubble will pop to the tune of a lullaby!

Freezefire can stun your enemies with an ice cold blast.

Use freezefire's fire rock to travel faster than spreading fire.

Freezefire can use both powers to cause maximum damage to enemies.

Loch Ness can use his water blasts to push you forward quickly.

Loch Ness' water blasts cause damage to enemies by the bucket.

Snow Bear can stun enemies with a powerful breath of cold snow.

Snow Bear can use his bear instincts to locate near by enemies.

Use Snow Bear's camoflauging abilties to blend in with the snow.

Use Stinkfly's scent to blend your enemies.

Take to the skies with Stinkfly's Wings.

Use Way Big's tall legs to get from one place to another faster.

Way Big can fire cosmic beams at your enemies.

Get a view of the whole area using Way Big's bird's eye view.

Rollerboaster will grow to normal size and be in humanoid mode, shielding you from attacks.

Rollerboaster will become a rollercoaster for you to ride around in.

Rollerboaster will shoot a sonic scream at an enemy, stunning it.

Use Cannonbolt's armored shell to protect yourself from enemy attacks

Roll up in a ball as Cannonbolt knocks down incoming enemies

Take to the skies with Ultimate Big Chill's Flaming Wings

Ultimate Big Chill can protect you from attacks with intangibility

Quadramutt's incredible endurance protects you from your enemies attacks

Quadramutt slams the ground, knocking back and stunning your enemies

Fires off a powerful electrical blast at your enemies

A quick electrical shock that revives a few of your allies

Creates a thunder storm around you, increasing the power and damage of your other attacks for a short time

Ever since Planet Nasty arrived, Ben's Omnitrix has been going haywire and not letting him transform into aliens. Team up with Ben 10 to fix the Omnitrix, stop Vilgax and the Nast, Help the Plumbers and save the world.

Ever since Planet Nasty arrived, Time has been up and down. Paradox believes that King Nast can time travel. Team up with Professor Paradox to repair time, restore events, aid fellow time travelers and save the world.

Toby: HEY! THAT THING STOLE AN ITEM FROM YOU!

Connor: Bring that to me.

Connor: This is a gun with Matter Maruader DNA inside!

Toby: You can have it.

(Azmuth): Benjamin is a fool! He's carelessly wondered around while his Omnitrix leaks precious codon samples all over. If it gets into the hands of one of those Nasties, their powers will be enhanced. Please assist me with collecting the leaked samples and you will recieve a reward.

(Azmuth): Good work. Now find the second Codon sample. I've picked up a strong signal in Crestville. Check for the sample there.

(Azmuth): Two down, one to go. The final sample is on Terradino. Use the ship at the Plumber's base to get there.

Step 3: Go to BTO Bellwood and warp to Terradino using the ship.

Step 4: Find the last Codon sample and bring them back to Azmuth for a reward.

(Azmuth): Thanks for your help. You did a pretty good job... for a human. Anyway, here is your reward.

1. Get to Toby. He will tell you to find Nasty Toby's lair.

3. Get into Nasty Toby's lair.

(Tyran) OH MY GOSH THE POOL IS GONE! Ask Flourfire. He hates water.

(Flourfire) I didn't see the pool, but I saw some TV Terrors, Computroublers and Electronixes with puzzle pieces of water.

(Tyran) Great! Bring them back to the pool.

(Tyran) I THOUGHT I FINISHED HIM OFF

(Tyran) Thanks! Now the pool is fixed.

Gingka: Some dude stole my scarf! You gotta get for me!

Madoka: Oh his scarf! I saw Nasty Gingka run into the Infected Omniverse!

Tsubasa: Ah, The Omniverse. It's near The Codon Stream.

Nasty Gingka: What! (Player's Name) Tyren should have killed you! Anyway, let's fight!

Gingka: Thanks a lot! I didn't know what I will do without my scarf. You're the best friend ever!

Gingka: So you're back for more! Just the person I needed! Once again, a TV Terror has stolen a piece of Omnitrix Pegasus! Have you got what it takes to defeat it?

Gingka: What the fudge? A decoy! Go find my dad; Ryo Hagane. He'll know what to do.

Ryo: A kid? You were sent here by Gingka? About losing Omnitrix Pegasus? Nasty Ryuga has it!

Madoka: The clue is that Nano Gingka and Nano Pegasus go well together. You can Nanos two at a time now!

(Magno) I need some components for this potion: some golden bubbles, Nasty Matter and a cleanser.

(Magno) Now get the Nasty Matter by killing some villians.

(Magno) I think I left the cleanser in Chococake's house.

(Chococake) Some floating guy that looks like one of Tyran's aliens stole it!

(Magno) GET THE CLEANSER FROM HIM

Magno mixes them together and sprays gas from the cleanser onto it. It explodes.

(Edward) The flerks are being attacked you must go help them

(Doctor) Defeat Brainwashed Lucy and return her to normal before she brainwashes the planet!

The Spawn of Evil

Zon: Hey there! You mind helping me out? I was flying off to some other planet in my ship here, when these giant, evil, flying creature things knocked my ship out of the sky. During the crash, a machine on my ship somehow caused the energy that allows me to transform to erupt everywhere, and now there are evil energy creatures running everywhere! Destroy them, and collect their energy essences.

(Zon) Hey, great! Now, I just need a few pieces of tech and I can absorb this energy again.

(Zon) Say, you're pretty good at this.

(Zon builds a small device, which siphons the energy back into him. The device then glows and explodes, and the Quadramutt Nano appears out of it)

(Zon) Looks like I won't be getting that guy back...

(Zon) I hate to bother you again, but it turns out I can't leave yet. My ship is still missing some vital pieces, and, apparently, we didn't collect ALL of my energy earlier. Some excess energy has merged with what appears to be the pieces of my ship, and now there's a huge Nasty Zon Mech stomping around killing valley creatures! Please destroy it, and get that energy?

(Zon) Wow, that was incredible! Here, take this.

An Adventure given by Dan, you go and gather Abruian Pelarotas for the party! November 8-November 19 only!

An Adventure given by Rex, find the cosmic storms in a race with your friends! January 1- January 31 only!

An Adventure given by Gingka, find all the roses to give to Gingka from him to give to Madoka! February 14- February 27!

An Adventure given by Jean, to stop zombies before they eat everyone's brains. Join your friends to beat zombies from the dead! October 16 - October 31 Only!

An adventure given by Brandon. The Conqueror is back and up to no good. Help Brandon stop the Conqueror from using the Omnitrix to possess the power of the Nast. September 20th-September 31st Only!

It's Christmas Time and heroes as well as villains have joined together to celebrate the holiday but the Nasties are up to no good and are attempting to destroy the true meaning of Christmas! Help Ben 10 stop the Nasties from kidnapping Grandpa Max for thinking his Santa Claus, creating Nasty Snowmen and ruining the annual BTFF Fall Christmas Party with the help of the Incursians! The Party will be giving out hoverboards and cars, presents, suits, Snow Bear and Big Chill Nanos and New NPCs!

Alternate Logo featuring Ben
Add an image to this gallery
Retrieved from "https://ben10fanfiction.fandom.com/wiki/BTFF_Fall?oldid=690268"
Community content is available under CC-BY-SA unless otherwise noted.