Azmuth is a character in Ben 10: Reboot Revolution. He first appeared briefly in Death of Ben 10 Chapter 17. He is a Galvan from the planet Galvan Prime in Earth-1010.

Azmuth is a tiny grey alien only 4 inches tall. he wears green and black robes robes with metal braces. he has green eyes.

Azmuth can be paranoid, rude, and arrogant. He often refuses to do things for other people regardless of how simple the task unless it suits him. He often dislikes working with people if he can avoid it.

Despite everything, he has a good heart and tries to act for the better of society in the universe.

Azmuth possesses a vast intellect, being miles above most other Galvans in terms of brainpower. As a result, he is often referred to as the 'First Thinker' by other Galvans.

Being its inventor, Azmuth has a better knowledge of the Omnitrix's powers and functions than anyone else.

He has very little combat experience. Even though he would be more technically skilled with it, he would likely lose in a fight with Ben if they both had an Omnitrix.

Azmuth can be reckless at times, often not planning very far ahead.

His small size leaves him vulnerable to larger foes.

Azmuth is a brilliant inventor, and one of the smartest Galvans to have every lived. He is the inventor of the Omnitrix and Ascalon. He has become closely associated with Ben in recent years, often helping Ben by upgrading his Omnitrix as it is needed.

Shortly before Death of Ben 10, he disabled the Omnitrix's universal translation function to make sure Ben was incapable of accidentally offending the Nemuina during negotiations.

Azmuth appeared briefly in Chapter 17 when Ben opened a portal to Galvan Prime and returned Ascalon to him.

Azmuth arrived at the Bellwood Plumber Base 20 minutes prior to Chapter 2, ahead of when Rook had been expecting him. His first proper appearance was in Chapter 3, when he removed the Prime Omnitrix from Ben Delta's wrist and gave it to Max Prime in order to heal his injuries. Later, in Chapter 7, Azmuth helped return each Omnitrix to their rightful owners, but refused to help them come up with a way of defeating Time Breaker Ben.

Prior to this series, Azmuth created the Alien Data Packets. These recordings are stored within the Stardust.

Azmuth briefly appeared in Burning Bridges to give Ben the T2 Omnitrix. Given Ben's recent tantrum, he gives Ben one week to prove his worthiness of wielding the Omnitrix. If not, he will forever lose the device.

The Omnitrix is perhaps Azmuth's best known creation. It can turn the wielder into any number of sapient lifeforms. There were many versions of the Omnitrix, as well as devices very similar to the Omnitrix, that he created before the final version currently worn by Ben Tennyson.

The remote database used by all known Omnitrix variants bar the Ultimatrix. It was constructed on the planet Primus.

A species of autonomous drones that live on Primus and maintain the Codon Stream. They effectively act as antibodies for the Stream.

A race of sapient technological beings accidentally created when Azmuth terraformed the moon of Galvan Prime, Galvan B. Although completely accidental, he considers the Mechamorphs to be his children. Due to their peaceful nature he also considers them to be his gift to the universe. They are his favourite creation.

Perhaps the invention to have caused Azmuth the most grief, Ascalon is a blade capable of manipulating the very fundamental forces of the universe. It has had a number of wielders over the years, most of which have abused its power. Ascalon was stolen by Eon sometime after Ben first returned the weapon to Azmuth. After a fight with Professor Paradox, Ascalon was forgotten and left on Pyros where it was claimed by Apollo.

Originally built by Blukic and Driba, SD-1 was completely remade by Azmuth at Kevin Levin's request. She is a next generation Pixi Artificial Intelligence Hologram built into the Stardust to accompany Ben on his galactic road trip.

Azmuth congratulated Ben on his efforts between the events off Life On Mars and Tides of War. 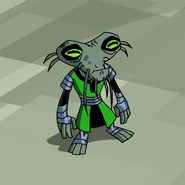