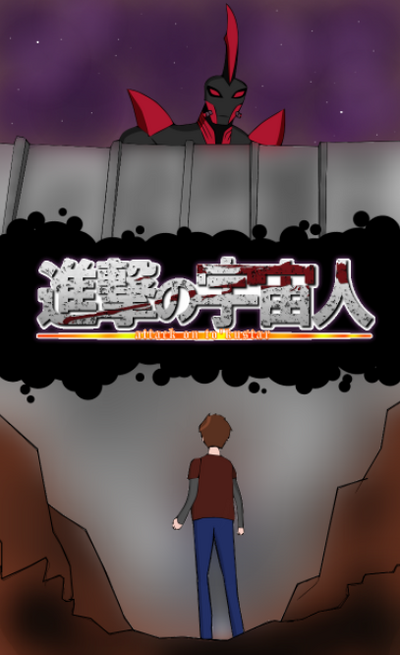 Attack on To'kustar (進撃 の 宇宙人, Shingeki no Uchujin, "Advancing Aliens") is a spinoff series created by Paperluigi ttyd. The show takes elements from the Ben 10 canon, as well as from many other series. It is a multi-genre work, containing themes of survival drama, war drama, conspiracy thriller, action/adventure, and epic fantasy. The series was created in July 2014, with the first episode being released on January 6, 2015.

500 years ago, they appeared; the To'kustars, bringing destruction and death, forced humanity to retreat to inside three giant walls named after the ancient saviors of the world: Via, Sera, and Nova. For those 500 years, humanity managed to not only survive, but thrive. Now, the To'kustars are back, and some humans appear to be using them to nefarious ends.

Meanwhile, unrelated to the conflict with the To'kustars, more and more people have learned about the existence of humans who have mysteriously been born with special abilities. While far less than 1 percent of the population knows about these Espers, and an even fewer amount are Espers themselves, their mysterious origin and unknown potential can only bring about conflict.

Attack on To'kustar was originally created on July 3, 2014, but it was soon abandoned. Then, on December 27, 2014, at Winter Fanon Con, the creator confirmed that it would actually be created, and that it would serve as a spiritual successor to another of the creator's projects, Knighted. The first volume of the series was released on January 6, 2015.

After the fourteenth episode, titled Sisters, was released on July 15, 2015, the series went on a long hiatus, and the next episode, titled Knight, was not released until April 4, 2016. Since then, the series has progressed to a semi-regular schedule of sorts. Episodes are released on average every couple of days, but there are no days of the week in which episodes are always released on. As of July 8, 2020, 23 episodes in all have been released.

The first season is confirmed to be six chapters, with 28 volumes in all. Lastly, the creator has also stated that most chapters will be between four and six volumes, but that sometimes there might be as few as two or as many as nine volumes per chapter.

On April 17, 2017, a second season was confirmed, given the title Espers of the Heart. On May 15, 2017, the subtitle was removed from the season and the confirmed chapter titles changed. The second season was also confirmed to have six chapters and 24 episodes in all.

All episodes are planned out months in advance by the creator, but episodes are not actually written usually until just before they are released. Planning usually involves determining a general plot and then later adding sub-plots. The sub-plots come in two kinds: structural, which allow the specifics of the main story to be fleshed out, and developmental, which allow for more exposition, world building, or character development. Usually, structural sub-plots are more concrete, with a definitive beginning and ending, as they determines how episodes are broken down into chapters. On the other hand, developmental subplots may have a clear beginning, but they can be stretched out or delayed indefinitely as other sub-plots take priority.

All episodes are written by the creator himself. Episodes generally take five to seven days to write, though some can be written in two to three days or as short as a day. Some episodes take longer to write. All together, a chapter can take anywhere from a week to two months to write. In terms of release schedule, episodes have generally been released as soon as they are finished, but starting with episode 23, they will not be released until all of the chapter is finished being written.

According to the creator, there is enough material planned for many seasons, but it is unlikely that all the planned material will be adapted into episodes and released. It is possible that each season will have an open ending so that the series always has a chance of continuing.

Episodes are each given two titles: a one-word title that is somehow related to the events of the episode, and a longer title related to the actions of one specific character within an episode. The longer title is considered the official title, while the one-title is used for convenience in naming pages, as some of the official titles can be quite ridiculous and long.

In the first season, all chapters are named variations of "Attack on...", but in future seasons, chapters will be named in different ways.

Start a Discussion Discussions about Attack on To'kustar