Atomix is the Ultimatrix MK10's DNA sample of an unknown species rom an unknown planet.

Atomix has a humanoid robotic appearance that is taller than Negative Ultimate Humungousaur. He has a green and white body. He has large cylinders on his arms, near his wrists, that are full of a green energy with dark green bubble-like spheres, and these spheres constantly move on Atomix. He has the same energy on his Omnitrix-shaped chest. His mouth doesn't move when he talks and his head is a pointed, armored helmet. It appears that it looks like h has shoes on his feet as well.

Atomix wears the Ultimatrix MK10 symbol on his green and white belt.

Atomix acts with a kind of "righteous" personality, and speaks to others with proper titles, such as referring to Max as "grandfather," and Gwen as "cousin."

Atomix names his special attacks, much like a character from an anime show.

As his name implies, Atomix can create and manipulate nuclear energy using his hands, which can do a massive amount of damage to its surroundings. Fundamentally, he is a walking nuclear reactor. The way he creates the blasts is by chanting "HAA-MEE-NA HAA-MEE-NA HAA-MEE-NA-HA! It is not crucial for Atomix to chant every attack, but doing so will focus an attack's power and cause substantially more damage.

Atomix is able to activate his cylinders on his arms and his Omnitrix-shaped chest to melt nearby objects.

Atomix is strong enough to take out Negative Ultimate Humungousaur with a single punch, or kick an object up nearly past a planet's atmosphere. His hard body gives him substantial protection against physical attacks.

Atomix is capable of flight.

Atomix is boundlessly overconfident and can cause a total meltdown.

Atomix can get tired after using up most of his energy, as seen in Malgax Attacks. 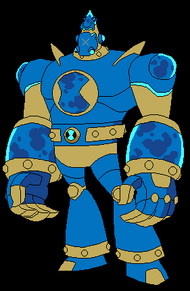 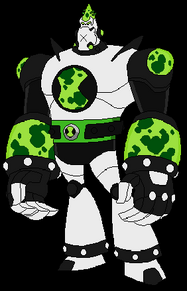 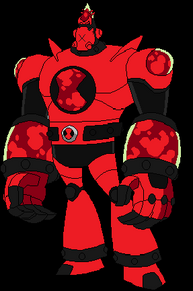 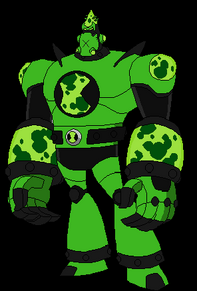 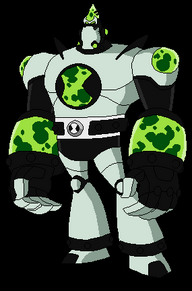