Atomix is the Infinity's DNA sample of a Nicleoan from the planet Nicleoa in Bryce Bowman: Origins

He wears a black jacket that resembles a suit jacket. Black pants cover his skeletal legs. He also wears a silver belt.

Pieces of Atomix's ever-burning and regenerating body rise into the nuclear fire that eminates from his exposed forearms and head.

The Infinity appears on his belt.

The Infinity pulses with green energy, as Bryce's skin starts peeling back. The green light intensifies and Bryce's arm burns. The camera spins around Bryce as his whole body is burned away, leaving only a charred skeleton, hunched over. The camera zooms to his face, then boom! His eyes light up with green fire, which swirls around his head and torso, igniting life in him. Atomix stands tall with his arms at his side and nuclear fire rising from his exposed, skeletal body.

In Last Laugh (BBO), Atomix failed to defeat a group of Megawatts.

In Monster of the Earth, Atomix was used to help Vicktor Stein defeat s small band of Gaia's rock monsters.

Atomix is getting a rework. More information later. 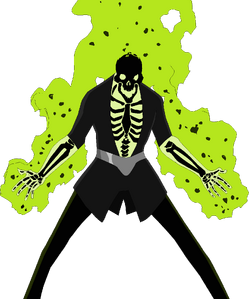 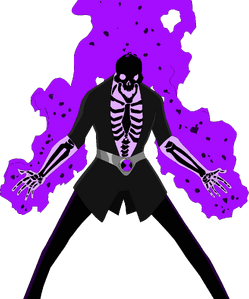 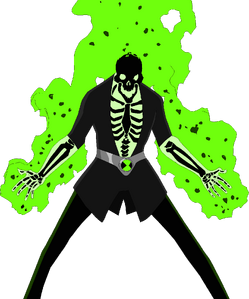 Atomix in Devil's Bounty
Add an image to this gallery

Retrieved from "https://ben10fanfiction.fandom.com/wiki/Atomix_(Earth-90)?oldid=886489"
Community content is available under CC-BY-SA unless otherwise noted.