Start a Wiki
Atom is an alien I created during a science lesson. He is free for anyone to use just give me credit.

Atom can control every single element. Water, fire, earth, air, technology - EVERYTHING! He can also fly and spin (when he spins he looks similar to a Beyblade) with super speed. He can also move with superspeed (obviously). Every being of Atom's species has the ability to evolve. This evolution is not like becoming Ultimate, it just makes them larger and stronger. They can only evolve for a limited amount of time then they will automatically return to their normal forms, as each Dee Enay matures their ability to control their evolution grows longer. Atom can also transform, into any form because he is matter and everything is made up of matter.

Atom looks like a water molecule. He is three atoms put together, but is the size of an Earth cow. He is red and white in appearance. When he naturally evolves he becomes all red with grey bonds. He has a round head, oval body, round hands and a spiked bottom with a round ball.

Atom makes his debut in The Life of a Villain when Kcaj fights Jack. He was unlocked by Rin off screen. 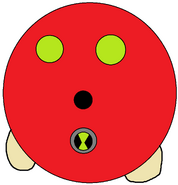 Atom by Ancy in MyPaint 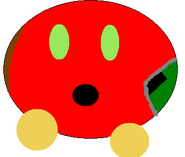 Atom transforming into water by UH 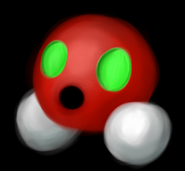 Atom made by Rob Macaroni 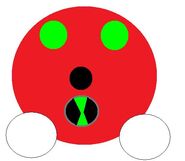 Atom by Fuse king
Add an image to this gallery
Retrieved from "https://ben10fanfiction.fandom.com/wiki/Atom?oldid=864755"
Community content is available under CC-BY-SA unless otherwise noted.