Astro is an alien transformation in the series, Brandon 10.

In Alien Force, Astro is a tall blue alien with a floating head. Astro has triangle-like hands and feet and round holes in his hands. He has the Omnitrix symbol is on his chest.

In Ultimate Hero, Astro's appearance does not change majorly from his Alien Force appearance and the Ultimatrix symbol appears on his chest.

Astro has the ability to shoot pure blue energy beams from his hands. He can also fly at high speeds just as well as hover in one place, horizontally or vertically. As seen in Tomb Raider, He can also charge up and release a ball of pure energy used for light rather than offense nor defense. In The Spy Who Evolved Me, Astro is shown to be able to withstand radioactive energy however not completely. Astro was able to replicate energy frequencies in The Dark Dimension Part 1 which allowed him to enter energy shields.

Astro can be weakened by radioactive and contaminated energies. 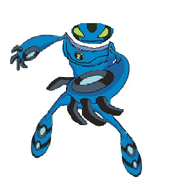 Astro in an Action Pose

Astro in a Standing Pose

Astro in the Alien Force Titles 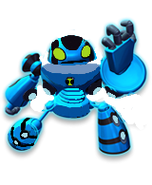 Astro Hologram in Aliens Among Us
Community content is available under CC-BY-SA unless otherwise noted.
Advertisement