He looks like Sevenseven, but with green replacing the magenta on him. His Omnitrix symbol is on his chest.

Without his helmet, he is weak against bad smells.

His name is a portmanteau of the words 'assassinate' and 'ten', the '-ate' suffix sounding like the number eight, being replaced by the number ten. 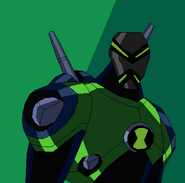 Add an image to this gallery
Retrieved from "https://ben10fanfiction.fandom.com/wiki/AssassinTen?oldid=818700"
Community content is available under CC-BY-SA unless otherwise noted.