Armodrillo is the Codon Stream's sample of a Talpaedan from the planet Terraexcava in the Andromeda Galaxy.

Armodrillo has a green-armored body and looks much like a robot. His head is similar to a Greek Corinthian helmet with two ears on it giving him the appearance of an armadillo. Armodrillo has a gray tail and jackhammer parts on his elbows, wrists and hands, creating the impression that Armodrillo is a digging robot. Despite the mechanical appearance, all of these aspects are in fact biological and natural to his race.

In The New Omniverse, Armodrillo looks similar to his Ultimate Alien appearance, but his ears are now longer, he has grey bolts with black markings on his shoulders and has a metal circle on top of his head. His face has been restructured a little bit, and his arm-drills are now much larger. His feet are now yellow instead of grey while his toes remain grey. His fingers now have a small horizontal line design along with his tail and the black parts of his limbs. His arms, upper arms, and thighs are now more chain like. His forearms and shoulder are now much bulkier.

In The New Omniverse, Negative Armodrillo's armor is red instead of green, with red eyes and with the Ultimatrix symbol being the same color. 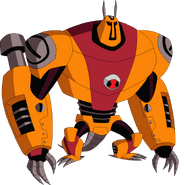 Armodrillo can create destructive earthquakes by placing his hands on the ground and pumping the jackhammer pistons on his elbows.

As seen in Reflected Glory, Armodrillo is able to create fissures in the ground.

Armodrillo can turn his hands into drills.

Using his jackhammer arms, he can create shock waves and can launch objects he is holding.

Even though Armodrillo's armor is highly durable, it is not strong enough to keep Argit's spikes or Zombozo's bowling pins from getting him hurt.

In The More Things Change: Part 2, Psyphon used a weapon that caused Armodrillo's nervous system to go out of control, making him unable to stop vibrating his left arm.

Electricity can stop him from moving and can even knock him out.

Retrieved from "https://ben10fanfiction.fandom.com/wiki/Armodrillo_(TNO)?oldid=808241"
Community content is available under CC-BY-SA unless otherwise noted.