Arctiguana is the Omnitrix's DNA sample of a Polar Manzardill from the planet X'Nelli set to appear in Bryce Bowman: Devil's Bounty.

As his name suggests, Arctiguana's appearance somewhat resembles an iguana. He is a cold-blooded alien whose blood is really cold.

Arctiguana has small spikes around his face, three dorsal fins reaching down his back and white gills on the sides of his head. He has white pants and a black open-front shirt with white cuffs and he wears the Omnitrix symbol on his left hand.

Ice cold fluid runs through Bryce's veins from the Omnitrix up through his arm and into his face and specifically his eyes which close briefly, then burst with orange light. His back arches forward, three shark-like fins sprout from his spine. Then, his right hand pulses as his skin is turned ice blue and small claws grow from the tips of his fingers. He spins once, then slams his front left leg down, the Omnitrix badge glowing brilliantly as he releases cold air from his mouth.

Similar to Big Chill, Arctiguana is capable of breathing ice and firing a long-range freeze ray that isolates targets in ice. This ice breath is cold enough to freeze large bodies of water and molten lava in an instant.

Arctiguana possesses enhanced agility, as seen when skating across an icy path in a snowboard-like fashion. In the same scenario, he can use his ice breath to create constructs made of ice.

Arctiguana possesses enhanced strength, and can make an Arachnichimp's webbing brittle enough for him to break free of.

Arctiguana possess enhanced durability, being able to withstand crashing into a wall and being hit by a Petrosapien's shard projectiles.

Arctiguana possesses enhanced dexterity thanks to his four-fingered hands and can crawl up walls without struggling.

Arctiguana can survive in environments with sub-freezing temperatures and breathe underwater.

If Arctiguana uses his ice breath too much, he will need to catch his breath before using it again.

Arctiguana's durability has a clear limit. 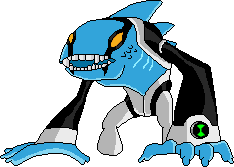 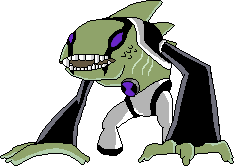