Arctiguana is the Infinimatrix's DNA sample of a Polar Manzardill from the planet X'Nelli in Ben 10: Protector of the Omniverse. He is the Timeline 1 equivalent of the canon Arctiguana.

Arctiguana has his Ultimate Alien appearance, but he wears his Omniverse outfit, with the addition of having white stripes on his pants. His colors match the color palette of Heroes United.

Similar to Big Chill, Arctiguana is capable of breathing ice and firing a long-range freeze ray that isolates targets in ice. This ice breath is cold enough to freeze large bodies of water and molten lava, and can make an Arachnichimp's webbing brittle enough for him to break free of. His ice is also very slippery.

Arctiguana possesses enhanced agility, as seen when skating across an icy path in a snowboard-like fashion. In the same scenario, he can use his ice breath to create constructs made of ice.

Arctiguana possesses enhanced strength, enough to push Petrosapien off a building and break a car.

Arctiguana possesses enhanced durability, being able to withstand crashing into a wall.

Arctiguana can use his breath as a means of quickly hovering himself (along with anyone holding on to him) across the ground.

Arctiguana can similarly use his breath as a mode of flight.

Arctiguana possesses enhanced dexterity thanks to his three-fingered hands and can crawl up walls without struggling.

Arctiguana is immune to gas.

Although he has never trained himself to do so, Arctiguana can survive in environments with sub-freezing temperatures.

If Arctiguana uses his ice breath too much, he will need to catch his breath before using it again.

Arctiguana's durability has a clear limit.

Arctiguana can be trapped in an Arachnichimp's webbing unless he makes it brittle using his ice breath. 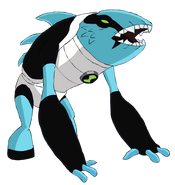 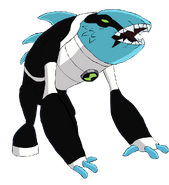 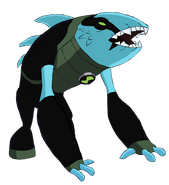