None
Arctic is the main character in Bax 10: When Omnitrixes Collides. He is a White Loboan nicknamed the "The White Wolf" from Earth-107.

Arctic is a seven year old White Loboan with white fur, ice blue eyes, black fingerless gloves with his feet covered and he also has a blue full suit.

He is sometimes shy when it comes around to new people to making him silent. He's usually talkative when someone brings up a scientific subject or when he's correcting someone. He is sometimes quiet because he is mostly working and sometimes doesn't focus on anything else besides his work. He is sometimes never loosen's up when everyone else is having fun either he is too embarrassed or too busy. Sometimes he'll have the confidence to overcome his fear of embarrassment and learn to have fun with his friends but he is no pacifist when it comes to fighting.

He can shoot ice beams out of his mouth and freezes his enemies. He also has ice claws that can cut almost anything like metal, steel and wood as examples.

He also carries an Ice Arc Rifle for gun fights.

His weakness is being proved wrong since he is the smartest in science on the team and in the Enforcer Plumbers. Another is to see Venus getting tortured and stealing her energy which will turn him into a blood thirsty wolf.

Born in the North Pole on Earth where the White Loboan were adapted and built there own society with the vast cold lands. Arctic was the smartest of the his pack building them new technology alongside with humans. He was offered a job at the Enforcer Plumbers and accepts the offer and became one of the top rank scientists. He later met Venus the Anodite while working the E.P. HQ and had a crush on her but was too embarrassed to ask her out till later He later joined with Shaun and his team when he heard about traveling to another dimension and seeing that got called in to join as well and hoped that he would overcome his embarassment. 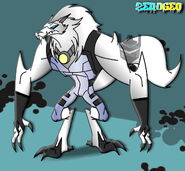 Ice Arc Rifle
Add an image to this gallery
Retrieved from "https://ben10fanfiction.fandom.com/wiki/Arctic?oldid=785326"
Community content is available under CC-BY-SA unless otherwise noted.