Ben 10 Fan Fiction Wiki
Register
Don't have an account?
Sign In
Advertisement
in: Aliens, Brandon 10, Aliens in Brandon 10,
and 12 more

Aqualad is an alien transformation in the series, Brandon 10.

Aqualad is a blue, and slightly clear, colored alien with a blob-like physique as well as skinny arms. Due to his shape shifting capabilities, he can often change his form into various shapes. His eyes are green and the Omnitrix symbol on the center of his mid-section.

Aqualad has the ability to control water, mostly the water that he is made out of. He can also change his shape and form as well as stretch his arms out at far distances. Being made out of water also makes him pretty resistant against most types of damages and attacks including explosions.

Despite being made of water, Aqualad can still be injured by electricity and heated sources that could make him evaporate. He can also be contained which could hinder his expanding abilities. 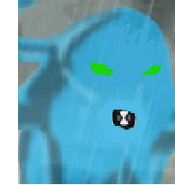 Aqualad in the Original Series

Aqualad in an action pose
Community content is available under CC-BY-SA unless otherwise noted.
Advertisement