The Aqasians are a race of Gamma Energy-powered beings that date back to nearly the origin of the universe. They are featured in Mig X and mentioned through various series in the Mig 10 Franchise.

The Aqasians, or what used to be them, lived on a planet called Aqasia. Aqasia was a malformed planet that was repeatedly bombarded by asteroids during its creation, and was turned over on its side. Its star has long since supernovaed and became a small dwarf star, which it is far from.

The landscape of the planet is filled with giant craters and uneven terrain. Once the Aqasians began to 'colonize' the planet, they built makeshift structures from the harsh material on the planet, essentially rock and other materials unknown.

History of the Species

The first few Aqasians harnessed the Pure Gamma Energy, which came directly from Gamma and was manipulated directly from him. As time grew on, the Gamma Energy that made the Aqasians began to grow unstable, due to being clumped up and used up so often.

Due to the energy being in this form for so long, it became Impure Gamma Energy, which allowed the Aqasians to develop DNA, or at least, DNA-like molecules that allowed for reproduction. Because of this, they were then able to manipulate DNA, after some time.

Two factions fighting for power of the throne led into a Civil War that erupted on the planet. Eventually, one family won over the other, and the 'government' system on Aqasia became a total anarchy after the assassination of that family. The war eventually ended with a new family seizing power, though the entirety of the Aqasian society was in ruins.

When he got older, he began growing more and more unstable when his powers matured and was approaching death, as was the ultimate fate of all Impure Aqasians. This led to Terox openly rebelling against the beliefs and norms of his people, going against Gamma, and thus placing a target on his family.

To absolve this, his father captured and contained Terox and left him to die naturally. Terox managed to escape his confinement and murdered his parents in front of the newly-appointed Aqasian King. He then destroyed properties and inhabitants, later unleashing the entirety of his fury and massacring everyone on the planet, but not without suffering vast injuries from those who rebelled against his onslaught. 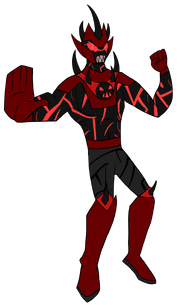 The Aqasians take on a humanoid shape for the most part, as the Gamma Energy which made them was only that one form. They contain spiked protrusions from their skin around their heads, like horns, and all along their backside as well. Their veins are visible through their outer skin, revealing the blood inside of their bodies rushing around and glowing, powered by the Gamma Energy.

Their color schemes ranges from orange to black, with red indicating the mature stage of life. The early stage of life was a brighter orange color with little to no development of horns or the sort, and the elders turned dark black and eventually decayed into virtually nothing.

Their clothing consists of cloth and other such basic materials, as they did little to no trading and made everything on their own, or stole from other planets nearby.

Some Aqasians, with enough focus, can achieve the ability to teleport. This generally indicates a higher concentration of Gamma Energy inside of them as it is complex to do this.

Impure Aqasians, because of the nature of their creation, can manipulate DNA, and the very fabric of life itself. All Aqasians can do this, and they can also do it themselves. This means they are able to regenerate, change their size, alter their limbs, etc.

Impure Aqasians cannot come into contact with Pure Gamma Energy, although the likelihood of this is slim to none. Because of how different these two forms of the Gamma Energy have evolved over time, the mixing of these two energies becomes extremely unstable, leading to immediate death that they cannot reform from. Their essence then turns into Pure Gamma Energy and is reabsorbed by Gamma.

Impure Aqasians are born with the ultimate fate of dying prematurely. This is due to their unstable energy accumulating over time and becoming too much for their bodies to maintain. Terox, however, avoids this fatal weakness by using the Aqasian Stabilizer to keep him from being consumed by his own energy.

Retrieved from "https://ben10fanfiction.fandom.com/wiki/Aqasian?oldid=859494"
Community content is available under CC-BY-SA unless otherwise noted.