Aosei has greyish skin and navy blue hair. He is also taller than his human form, Ben.

In the original series, Aosei wore a white gi top with black borders and outer edges and a black kaku obi where the Omnitrix symbol is. He also wore tight-fitting dark gray pants tucked inside black knee-high boots. He also had white bandages on his forearms. His hair was also shoulder-length tied in a low ponytail and sky blue eyes with light blue rings around the pupils.

In Alien Force and Ultimate Alien, Aosei now has the appearance of a teenager, only much taller as Shiki Sakurai and quite muscular. He now wears a greyish blue gi top with blue borders and no sleeves, tight-fitting dark gray pants tucked inside black knee-high boots and his bandages now are covering his arms minus his shoulders and hands. His hair, still tied in a ponytail now loose, is now very long and his eyes are now green with light green rings around the pupils. He wears the Omnitrix/Ultimatrix symbol on his chest.

In Ben 10: Omniverse, Aosei now wears a short green kimono with black borders and no sleeves and a black obi sash with a green belt where the Omnitrix symbol is located. He also wears tight-fitting gray pants tucked inside black knee-high boots, which now have green soles. He also wears tight-fitting black armbands with green edges almost reaching up to his shoulders.

11-year old Aosei in Omniverse looks the same as the original series but now has green eyes with light green rings around the pupils and the Omnitrix symbol on his obi sash is now green.

Aosei in the original series 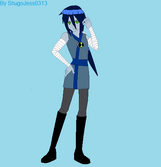 He takes a certain amount of pride in his honour and and is angered when it is stained.

Aosei has the ability to generate, control, project and manipulate energy, water and ice at will and can mold any of them into different shapes.

Aosei can heal injuries and wounds. He can also heal people's radiation burns.

this is not a real original alien

Retrieved from "https://ben10fanfiction.fandom.com/wiki/Aosei?oldid=884956"
Community content is available under CC-BY-SA unless otherwise noted.