The Anti-Life Entity was an antagonist from Tech 10: Rebooted. While he was not actively the main antagonist until the final episode, the repercussions of his actions and presence still reach throughout the entirety of the Tech 10 franchise.

In Tech 10: Star Spirit, the entity never appeared proper, although its resurrection was the underlying plot of the series.

The Entity was finally revived in Project Deca's Star Spirit tribute episode/continuation but was ultimately destroyed by All☆Star Cosmic. Ubermensch went on to use the revived form of the Entity as a transformation for himself for the remainder of the series.

The Anti-Life Entity was originally an alternate version of the human race. The timeline these humans hailed from was constantly ravaged by brutal wars and hardships, eventually driving the remaining humans to desperate extremes. By merging into a single entity through currently unknown means, they were able to manipulate the energy that gave aliens their physics-defying abilities and used it to destroy their own timeline, and by extension, all of their enemies with it.

Not satisfied with this, the entity began a cyclical plan of action to rid all of reality of its suffering by destroying the misery-driven concept of 'life'. It created the Animam Creari and their homeworld of Veritum, planting the planet into the beginning of a timeline and leaving it there to develop with the rest of the universe. When said timeline reached the proper time in the development of its life, the entity's herald, Prelude, would summon the entity to destroy it.

Once the timeline was destroyed, the entity would examine the knowledge about it stored in Veritum's Archives of Oberon, then move on to the next timeline and repeat the process. It has been theorized that if a different being of equal power to the entity were to gain access to the entirety of the Archives of Oberon, it would be possible to restore every timeline erased by the entity, though this is only speculation.

The Anti-Life Entity's main role throughout the series was as a driving force for the actions of three antagonists: Dethrouge, Alpha, and Prelude. While Prelude, as previously mentioned, sought to summon the entity (eventually succeeding in that regard), the other two sought to delay the entity's arrival by stunting the development of life.

In If Earth Could Speak, the Anti-Life Entity's arrival in the Prime Timeline began, tearing rifts in space-time that threw Tech into non-temporal space.

In Forever To Say Goodbye: Part 2, the Anti-Life Entity finally arrived in-person, easily shrugging off the group assembled to fight him. He was finally made vulnerable after Dethrouge, impaled by one of the entity's attacks, destroyed the Light Drive at point-blank range, disintegrating himself and decapitating the entity. Before the entity could recover his head, Napoleon Eldridge and Moranna Ceres managed to infect his body with nanomachines that attempted to incapacitate him. Though this ultimately failed, it provided enough of a distraction for Tech to sneak up on the entity and fight him with his newly-acquired Tech Delta transformation.

The entity responded by teleporting both Tech and himself to a distant, dead planet to fight one-on-one. Even after Tech Delta was evolved during the fight, the entity still firmly had the upper hand, eventually drawing Tech in closer to deliver the final blow. However, Tech seized upon the opportunity by ripping the SpecTrix symbol from his chest and jamming it into the entity's, ordering it to activate the de-evolution sequence. Tech's evolved form was reverted to Tech Delta, and the entity was reverted back into a single human, with the rest of its energy escaping as what appeared to be lost souls. The remaining human quickly faded to dust, supposedly ending the Anti-Life Entity's existence.

The Anti-Life Entity never made a physical appearance in Star Spirit but was mentioned by name several times.

In Starman, the Anti-Life Entity was revived into a new, more powerful body by Divara using the nanomachines she had used the events of Star Spirit to develop. After swiftly defeating Terox and unsuccessfully attempting to grant Divara's death wish, the Entity engaged in battle with Technova, who fought him using All☆Star Cosmic.

After a dual-pronged attack from Attai Zehn's Gesamtkunstwerk "Sehr Gute Finale" and Millennia's Cross-Timer Armor, the Entity's new body was destroyed, forcing it to recreate its old one. In a final confrontation with All☆Star Cosmic outside the Earth's atmosphere, the Entity destroyed the Earth and the moon by slamming them into each other, only to be shortly killed by All☆Star Cosmic using the power of Bomb 2 Hell.

Divara later used the Celestial Clock to set Earth-83 back by ten years and undo her manipulations leading up to the present day, resulting in the Entity never being revived to begin with in the new version of events.

The Anti-Life Entity was able to manipulate the underlying energy that gives various aliens their physics-defying abilities, essentially giving him every power in the universe. This ability was somewhat tampered by his own lack of vision, however, resulting in him usually only using the base energy as his standard weapon of attack.

After his revival, the Entity realized the limitations of his methods and switched to using a more varied combat style making use of his various abilities.

It is notable that he has a latent ability of sorts that drive those that learn of him into madness. This ability is powerful enough to affect even synthetic lifeforms, and can only be counteracted via soul-based abilities.

The Anti-Life Entity was an armored humanoid figure glowing with green energy. A flame-like stream of the same energy flickered from the top of his head, and he appeared to lack a mouth.

On the surface, the Anti-Life Entity appeared to be a cold, calculating being operating on a moral scale far removed from our own. In reality, however, the entity was ultimately 'only human', so to speak, and when truly drawn into a fight, became rather angry and arrogant, which ultimately resulted in his downfall.

As mentioned above, he had a serious lack of vision and creativity, thanks to fully dedicating himself to his self-imposed task. As a result, he was rather easy to predict and was unable to even consider the idea that his ideology may be incorrect. 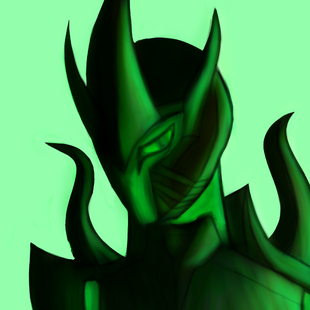 Paint-Sketch of the Entity's head. 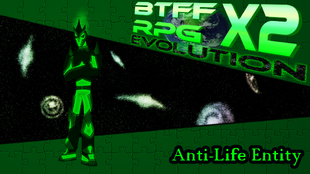 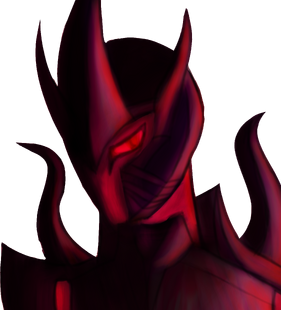 Ubermensch's incarnation of the Entity.
Add an image to this gallery

Retrieved from "https://ben10fanfiction.fandom.com/wiki/Anti-Life_Entity?oldid=876601"
Community content is available under CC-BY-SA unless otherwise noted.