Angelion is an alien from the series Project Deca. He serves as a modern take on Angel, the first alien ever uploaded to the wiki.

Angelion has the unique ability to create and manipulate both light and shadow without either force canceling each other out. While most of this powers is channeled through his wings, he can fire concentrated blasts of both from his horn. He has no eyes, instead relying on his connection with light and shadow to relay visual information directly to his brain.

Angelion's control of light and shadow allows him to create both illusions and solid holograms using Photonic Matter. He can use this ability on himself to effectively become invisible at will.

Angelion has the ability to fly at high speeds despite the lopsidedness and relatively small size of his wings. He also appears to have enhanced strength, being able to pull Veggie King into the air without much difficulty.

Angelion has a difficult time flying when wet.

AngelionSpecter combines Angelion's control over light and shadow with Heatspecter's ability to move through the ground, creating black and white flames of shadow and light as he does so.

A form created via the CataloGun by firing a transformation beam at Black Hole Sun with a blank primary slot and Angelion's card in the secondary slot.

Angelion's design combines demonic and angelic motifs as a reference to the original Angel's name contrasting with its demonic appearance. Additional design elements were drawn from Eva Unit 01 from the anime Neon Genesis Evangelion, which is (in?)famous for just being hella biblical, yo. 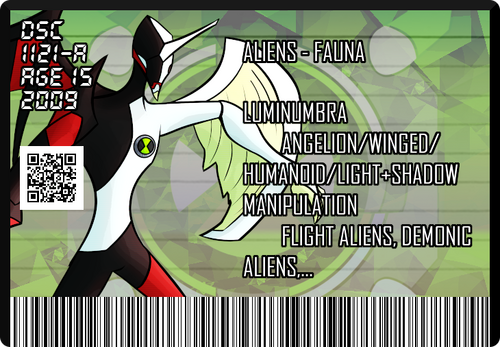