Start a Wiki
Andross Yasvix of the third house of Raal is a Human/Galaxy Lord he is the reason all the Galaxy Lords became extinct in face he created The Great One the great one was actually a siphoner of the life of planets who would return the energy to Andross for him to absorb. He loves the sight of blood and will do anything to cause war,death,and sadness. He hired Rex to kill off the Future Members of the Council Of Omnilords (Ben, Eve, Kurt, Rex, Sahria and others) that stop his plan to Destroy Time And Space and The Universe in process which in turn would allow him to recreate it in his image as the role of a God.He is Rex's 999th employer. 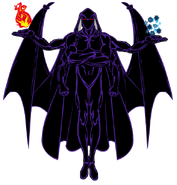 Galaxy Lord Andross
Add an image to this gallery

Retrieved from "https://ben10fanfiction.fandom.com/wiki/Andross?oldid=833216"
Community content is available under CC-BY-SA unless otherwise noted.