Analyzard (an-ah-lizard) is the Omnitrix's DNA sample of an Ornithis from the planet Al Hazen. He is a free use alien.

Analyzard is a humanoid reptile with brown skin. He has three yellow eyes with red slit pupils. He has sharp shoulder plates. The Omnitrix symbol is on his chest.

Analyzard possesses incredible analysis abilities, he is able to tell the properties of almost any entity from sight alone. This makes him incredibly useful for, say, identifying the purpose of a device or learning the powers of an alien.

Analyzard is somewhat light and agile, making him skilled at climbing things to a degree better than a standard human.

He is very skilled at using his hands.

Analyzard is unable to properly analyse extra-dimensional entities or reality warpers such as Naljian or the Contamelia. He also struggles to analyse entities from other areas of the multiverse to his own.

There are some things, albeit few in number, that comes from this reality that Analyzard cannot identify. Some objects that qualify are pieces of technology above level 17, although not all of them, as their inner workings are usually too complicated to guess at a glance.

Analyzard is a poor fighter. He benefits from Ben's knowledge and experience in fighting, but if used by someone else they likely would not have this advantage to bolster their poor fighting ability.

Analyzard is a free use alien, feel free to use him in your own series. 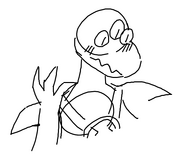