AmpFibian is the Omnitrix's DNA sample of an Amperi from the planet Tesslos set to appear in Bryce Bowman: Devil's Bounty.

AmpFibian is a blue jellyfish-like alien with six long tentacles that function as two pairs of arms and a pair of legs.

His fins are pointed.

AmpFibian has lightning shaped swipes on his torso.

He has large blue eyes with dark, prominent outlines.

The Omnitrix appears on his face, where a mouth would be.

The Omnitrix glows on Bryce's wrist, and teal electricity swirls over it once. Bryce's skin starts shifting to a pale, almost white, blue. It continues this way up until it reaches his eyes, which are closed at first, but burst open with electricity curling out and around his head. The lightning transforms his eyes into AmpFibian's, then the stream of energy flows down his back and over his arms; splitting and subsequently transforming them into AmpFibian's tentacles. The electricity travels quickly over his legs, transforming them as well. AmpFibian poses, hovered over the ground with each tentacle in a different stance.

AmpFibian can manipulate and produce lightning and electricity, launching them in electrical blasts. He can also absorb electrical energy and relaunch attacks.

AmpFibian has intangibility, and is capable of combining that with his electrokinesis to electrically shock any objects and beings he phases through.

AmpFibian is capable of both flight and underwater breathing, the latter of which allows him to swim at enhanced speeds.

Similar to Buzzshock, AmpFibian can become pure energy in order to enter electrical cables and generate a large energy blast that surrounds him.

AmpFibian's lack of bones allows him to squeeze into extremely tight spaces.

AmpFibian can read both human and Osmosians' thoughts by sensing the electrical pulses of their minds.

AmpFibian can survive in the vacuum of space and generate a protective energy shield around himself.

AmpFibian can use his electricity underwater, but if he is using electricity while entering water, or only part of him is in the water, he will shock himself.

AmpFibian's intangibility is useless against other beings that can also become intangible, as it will cancel out their abilities to do so.

AmpFibian is weak against enemies who can drain electricity.

Since his body is very frail, heavy objects falling on AmpFibian can make him faint. 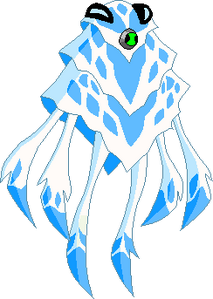 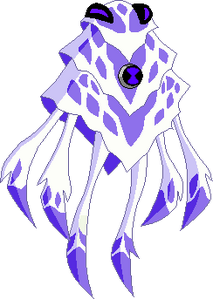