Before the Omnitrix's 1.5 recalibration in Ben 10: Across the 23rd Dimension, AmpFibian had his Omniverse appearance.

AmpFibian has his Ultimate Alien appearance.

Negative AmpFibian has AmpFibian's Ultimate Alien appearance, but the blue parts are as pale as Negative Big Chill's and the white parts are greyish white. 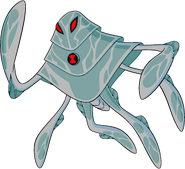