Alpha Proxima is a planet that is home to the Mimewts. It is the closest planet to the Proxima suns.

Alongside Mimewts and Similamander, Alpha Proxima is free use. The predatory species of Swamp Swarmers and the Nemetrix sample Tinyfang are also free use.

Alpha Proxima is a planet of many environments, from harsh polar caps to dense forests. It owes these diverse environments to it's position comfortably within the Goldilocks zone of it's solar system. What makes Alpha Proxima even more unique in this sense because the Proxima system is a Binary star system, meaning that it possesses two stars.

On Alpha Proxima, the first Mimewt species evolved around 15 million years ago on a relatively small landmass within the northern hemisphere of the planet. The species developed a primitive capacity to mimic the powers of other species to help confuse and escape threats.

Thanks to their unique ability, they were nearly impervious to attack. Between 15 - 5 million years ago their brains evolved rapidly, in turn allowing their mimicry powers to become more complex and complete. From 5 million years onwards they began to learn how to better utilise their powers, using them to develop primitive tools.

About 250'000 years ago they discovered how to produce fire without borrowing another species's abilities. This allowed them to remain active into the cold and dark hours of the night, as well as providing food and warmth.

20'000 years ago, tribes began appearing. Mimewts began developing agriculture and a proto-language. For here, expansion accelerated rapidly. 15'000 years ago they dominated and conquered their home island, with small groups exploring nearby continents by borrowing the powers of fish and birds. 12'500 years ago, there was a Mimewt on every major continent on the planet. Their species had developed boats and other primitive transport methods to help move long distances without tiring.

Around 9'000 years ago, their Bronze age began. Trading networks allowed resources to be sent across the globe as the Mimewts began developing economic systems and writing systems.

Modern history for the Mimewts begins around 8'000 years ago, as technology started rapidly improving. However, due to crises both on the planet and in the nearby star systems, the Mimewts only joined the galactic community about 2'000 years ago. 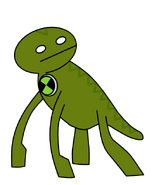 The name 'Alpha Proxima' means 'first planet in the Proxima system'. This is because Alpha is the first letter in the Greek alphabet.

It is also a play on the word 'Approximately', referring to the Mimewts imperfect ability to replicate powers.