Alpha Adam  she is a unknown girl who is one of Ben's first love interests, who makes her first debut in ben life his father is disappear . She is also forever Ben's girlfriend. she was a normal human in

Alpha Adam she wife Ben Tennyson when she kid , She fall in love Ben 10 Ben she can't see him because Kai she let her go away from him .. Kai she bullying at her, Alpha The family alpha is disappeared with alpha father alpha he's brother is " paradox " Max Tennyson was he best friends paradox found alpha stuck in virtual world , and he Can materialize her in earth , And when she back She Lost her memory when max find her he says " You have a bad Memories children " she all the times get a nightmare always, When she saw Ben She fall down When she open her eyes she find herself in the hospital! When Gwen saw her she Was very happy to see she best friend back she hug her Ben didn't understand what going on so Kai was jealous! When Ben remember her he hug her so alpha she can see the future and go in anyway to virtual world and she can breakthrough any data she want and she tell Ben she love him so Ben he love her too And she tell him she will be he's wife, alpha she have a watch not look like Ben , Her watch when she use the watch Wing will appear , At First , Alpha She is not. a normal Human Like any girls , She Have A Bad memories, And She Into The Digital Data , The Virtual World Before The War " War Of Bloody " She family All Of Them Dead She Thought, But She Not sure If they Alive Or not , She go All the Time With Ben , He's Friend in children last 9 Years when Ben he's 2 years old, alpha was 1 years old , She Didn't Know If she have a brother or sisters , She Just remember Her father when he said " Alpha !!! alpha !! Just Go in The Digital Data , Dear .... Goodbye "

she have a pink hair and that Inherited from her father , she have a green eyes she have a dress and color green and pink she have her down-eye pink and the another eye its green and Has her hands in glove short and have some designs under her short skirt transparency has sign bin in her right foot and her hands also most of the design of her dress was the son of innovation helped, Alpha she liked Ben his beautiful and its beauty.

she appear in original series and she like Ben in school when he was kid 10 year old , she was enemy for kai , alpha always take her careful from kai because kai if see her will bullying at her , alpha hate kai .

She made a cameo appearance in Ben's dream world in Perfect Day, where Diamondhead saves her and a group of cheerleaders from Sixsix and Vulkanus.

alpha she appear in the war with her father and his brothers to fight vilgax .

alpha she is half-human she memory not a normal like any human and she Can crash land in seven seconds only .

Alpha she destroyed ship vilgax in the space , she help ben From behind his didn't known that

she take all Ben Tennyson controls in his omnitrex because she need more powerful to kill someone .

she lost her memory after the war when paradox Gave it back her back To the Earth .

he will Be Married In future and have a kids Olivia Tennyson and Ken Tennyson And end Of Mission . 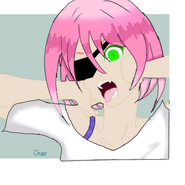 Add an image to this gallery
Retrieved from "https://ben10fanfiction.fandom.com/wiki/Alpha_Adam?oldid=757949"
Community content is available under CC-BY-SA unless otherwise noted.