Ben 10 Fan Fiction Wiki
Register
Don't have an account?
Sign In
Advertisement
in: UltiVerse, Aliens, Ben 10: Protector of the Omniverse,
and 11 more

Alien X is the Infinimatrix's DNA sample of a Celestialsapien from the Forge of Creation in Ben 10: Protector of the Omniverse. He is the Timeline 1 equivalent of the canon Alien X.

Alien X as his Alien Force/Ultimate Alien appearance, but he has longer horns, and he is more muscular. His stars now occasionally sparkle and are larger. His colors match the color palette of Heroes United.

As the transformation track begins playing, Ben hovers in a dark green background with light green bubbles pulsating rapidly behind him. Ben spreads his arms out as his eyes change shape slightly, turning completely green. The camera zooms into his eyes as black and white energy (like a starry sky) sweeps through his internal body, making his organs vanish. The energy reaches his hands, and covers his external body. Ben crouches as the camera rotates around him. His hair disappears and three horns emerge from his head. His muscle mass increases slightly and the Infinimatrix symbol pops out of his chest. Alien X stands completely straight, completing the transformation.

Alien X has three personalities: Serena, the "voice of love and compassion", Bellicus, the "voice of rage and aggression", and Ben, the "voice of reason". All three of these voices combine to form Alien X's speech. Otherwise, Alien X is silent. The only things he will say are what he will be doing - what Ben, Bellicus, and Serena have agreed to do.

As Serena and Bellicus have been arguing for eternity and before they had no tiebreaker, getting them to focus on any present task is difficult at best. This leaves Alien X's body trapped in place, floating about a foot above the ground until an agreement is made.

Alien X is omnipotent, being able to warp reality, time, and space with ease and at any level he wishes. Even his thoughts can become real. In short, Alien X can do anything.

Alien X can create and recreate an entire universe at will.

Alien X can self-duplicate, create galaxies to suck in other beings, and travel at high speeds. He also possesses superhuman strength and the ability to grow to a gigantic size. He is skilled at hand-to-hand combat.

Alien X possesses telekinesis and is capable of deflecting energy attacks, such as those generated by a Prypiatosian-B.

In order for Alien X to perform any action, including simple movement and transforming back, two out of three of his personalities must agree to do so. This has proven to be a major weakness, as Serena and Bellicus were not interested in dealing with present affairs and wanted to finish past ones that were not possible to deal with without Ben.

Alien X is vulnerable to having his powers absorbed.

Alien X's actions onto reality can be neutralized and reversed by the intervention of other Celestialsapiens.

Alien X cannot manipulate mana directly; he would have to alter the universe to change the nature of mana first. Also, his cosmic powers do not work well against magic. 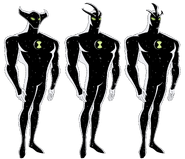